Photos and videos of the ostrich, shared on social media, have amused many. 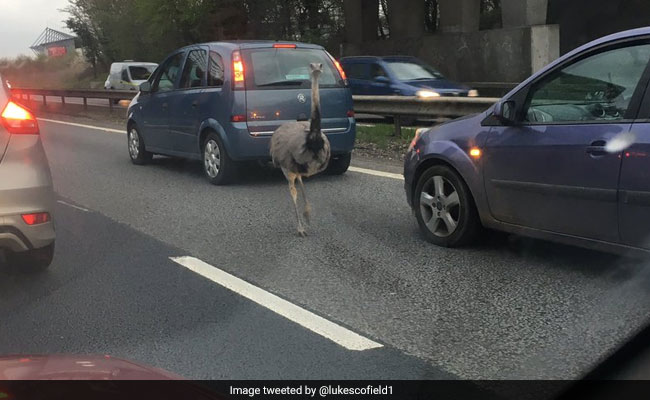 "Random Ostrich in the A12 stopping traffic," wrote Luke Scofield on Twitter.

People returning home from work were in for quite a surprise recently when an escaped ostrich named Colin caused a commotion on a busy road in the UK. The big bird was spotted running between the lanes during rush hour traffic in Colchester, UK, on Thursday.  According to Ipswich Star, its bid for freedom caused a traffic jam at least five miles long.

Photos and videos of the bird, shared on social media, have amused many.

"What is this? A f****** random Ostrich in the A12 stopping traffic," wrote Luke Scofield on Twitter, sharing a picture of the flightless bird and adding laughing emojis to his tweet.

An Ostrich has been causing some issues for drivers on the A12 in Essex this evening.

It's been stopping traffic and running loose on the busy road near Colchester.#AnimalNewspic.twitter.com/9JCu8dpsD2

"Ostrich on the a12..." wrote Grace Hoffman, posting a video which shows two men trying to shoo the ostrich away from the road.

According to the Mirror, Colin was captured and returned to its owner, Debbie Johnson, thanks to Essex Police.

"Officers attended the scene to support Highways England colleagues and the ostrich was located at around 7pm," confirmed a spokesperson for Essex Police.

Police constable James Ireland also took to Twitter to share pics of Colin and assure readers that the "cheeky chap" had been returned to its owner.

You may have seen earlier that this cheeky chap went for a wander up the #A12 with help from Sgt Andrews and PC Hercules he is now safely back home. Our job isn't all crashes and fines you know! @essexlivepic.twitter.com/88NlIT7JNA

This isn't the first time an animal on the loose has caused traffic woes for commuters. In 2018, a runaway kangaroo stopped traffic in the US.