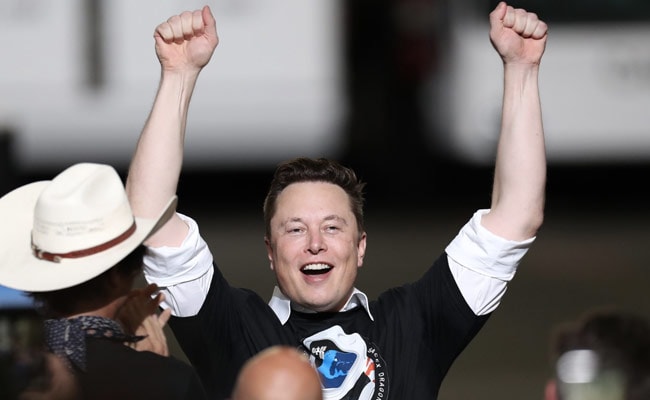 Elon Musk, the outspoken entrepreneur behind Tesla Inc. and SpaceX, is now the richest person in the world - a feat he himself finds "strange".

Elon Musk surpassed Jeff Bezos on the Bloomberg Billionaires Index, a ranking of the world's 500 wealthiest people, thanks to a 4.8% rally in the electric carmaker's share price Thursday. But even as his net worth touched a staggering $188.5 billion, Mr Musk himself was raring to go back to work.

On Thursday, a Twitter account called 'Tesla Owners of Silicon Valley' shared news to the 49-year-old business magnate becoming the world's richest person and earned a wry response from Mr Musk himself.

"How strange," Elon Musk responded, and followed it up by saying, "Well, back to work ..."

Well, back to work …

Over the past year, Elon Musk's net worth soared by more than $150 billion in possibly the fastest bout of wealth creation in history, according to a Bloomberg report. A pinned tweet on his Twitter profile explains what he wants to do with the money.

"About half my money is intended to help problems on Earth & half to help establish a self-sustaining city on Mars to ensure continuation of life (of all species) in case Earth gets hit by a meteor like the dinosaurs or WW3 happens & we destroy ourselves," Elon Musk explains in a tweet from 2018.

After overtaking Jeff Bezos as the world's richest person, Mr Musk - who has spoken about sending humans to Mars in the past - reiterated his pledge.

When a Twitter account simply named Mars asked him, "When's our first date? You've been teasing coming over," he responded by saying, "Playing the long game."

Elon Musk says he has little interest in material things and has few assets outside his stakes in Tesla and SpaceX. In an interview last month, he said he wants to use his wealth to build a city on Mars.

"I want to be able to contribute as much as possible to the city on Mars," Elon Musk said. "That means just a lot of capital."