A day in the life of a dozen plants - captured in this viral time-lapse video. 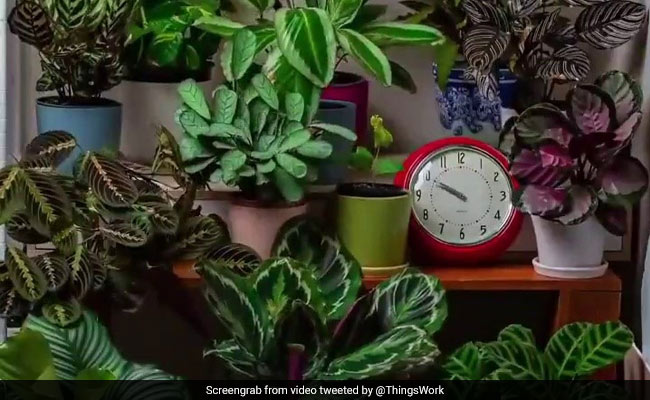 A viral time-lapse captures a day in the life of a few houseplants.

A strangely soothing time-lapse video is taking over Twitter. The viral time-lapse video, which has been viewed over 7 million times on the microblogging platform, captures a day in the life of about a dozen houseplants. Filmed over 24 hours, it shows how seemingly still plants are actually constantly in motion.

According to My Modern Met, the video was first posted on the microblogging platform by Twitter user '@Melora_1'. In the 12-second clip, the leaves of a variety of calathea plants rise and fall through the day. The movement of time is captured by a red clock on the table that stands in contrast to the various shades of green surrounding it.

Calathea is a genus of plants belonging to the family Marantaceae. They are the perfect to illustrate the minute movements of plants, as they have leaves that tend to fold together at night. Such plants are also known as "prayer plants" - as a number of viewers have pointed out in the comments section - because their curled up leaves can look like hands folded in prayer.

This is how plants move in a 24-hour time-period pic.twitter.com/zHJZAlJwzi

Besides having been viewed a whopping 7.2 million times on Twitter, the time-lapse video has also captured the attention of Ivanka Trump and the billionaire CEO of SpaceX, Elon Musk. Both the celebrities contributed to its popularity by 'liking' it on Twitter.

Take a look at some of the reactions it has garnered:

Those are varieties of the same plant - Prayer plant - which has evolved to special conditions - to catch rain water and light-.
Don't expect most plants to do that.

So much easier to perceive that they are actual living organisms watching this. ????

Some said the video served to remind them that plants are alive, while others found it a bit creepy.

Look at this!?! Plants are soo alive and we dont realize it!! #bekind#nature#ecofriendlyhttps://t.co/Mn6ey5rRod