Elephant Chases Boy After He Hits It With A Stick, Video Infuriates Internet 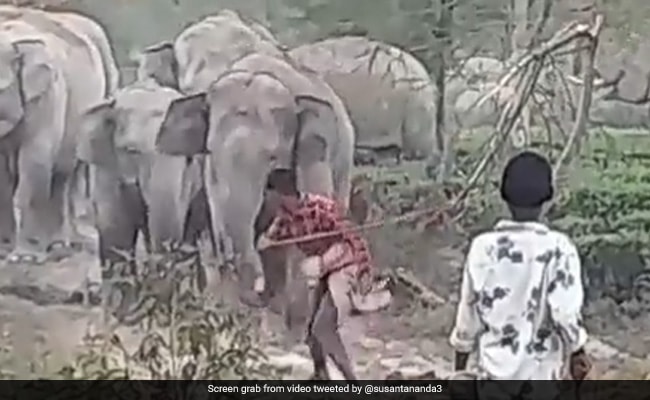 The video has infuriated the internet, with many calling for action against the boy

Human-wildlife conflicts are becoming more frequent and widespread as human populations grow and animal habitats are lost. In recent times, the number of reported wild animal sightings and attacks in and around residential areas has increased. In one such incident, a boy is seen in a video, hitting an elephant with a stick in an attempt to drive it away. The video has infuriated the internet, with many calling for action against the boy.

The video was shared on Twitter by Indian Forest Service officer Surender Mehra. Mr. Mehra shared this video on Sunday and captioned it, "Just madness…#Wildlife #conflict."

The undated clip shows a young boy hitting the jumbo with a stick as a large herd is seen in the background. He tries to beat the elephant and one blow even falls on the wild animal. In response, the angry elephant chases the boy but doesn't attack him. The young boy and his friend are then seen running away from the scene to save themselves.

Since being shared, the video has garnered more than 14,000 views and a volley of angry comments. One user dubbed the act as ''sheer madness'', while another wrote, ''We encroached their forest and planted. Now we are chasing them away as if they are a beastly burden. Why can't they inform forest personal before this suicidal act?'' A third said, ''After watching this video, it's justified when elephants crushes humans with their foot or destroy their house. We humans don't deserve earth.''

Some also called for the arrest of such people who inflict cruelty on wild animals, while others suggested that the forest department should find practical solutions for driving elephants away from villages as they destroy crops and damage property.