Earth Day 2018 will focus on the End Plastic Pollution campaign 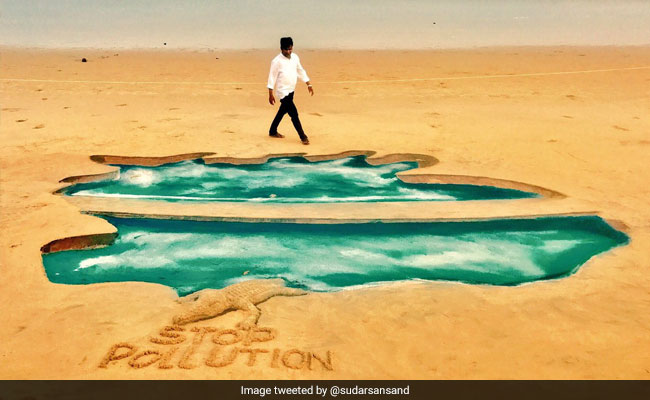 New Delhi: Earth Day is celebrated every year on April 22 across the world. The day is celebrated to spread awareness about the problems facing the earth and the need for conservation. It was first observed in 1970. This year, the theme for Earth Day 2018 is 'End Plastic Pollution'. With a focus on the problem of excessive use of plastic, Earth Day this year will address how we as individuals can cut down on the use of plastics and how it will help the environment.

To spread the message of ending plastic pollution on Earth Day, sand artist Sudarsan Pattnaik took to the Puri beach in Odisha to create a stunning sand sculpture.

The 3D sand sculpture shows a crocodile with a plastic bottle in its mouth and has the message "Stop pollution, Save earth".

"On #EarthDay with focus on #EndPlasticPollution, appeal all to curb use of plastics & polythene in daily life for well-being of Mother Earth," writes Mr Pattnaik while sharing pictures of his creation.

On #EarthDay with focus on #EndPlasticPollution, appeal all to curb use of plastics & polythene in daily life for well-being of Mother Earth. My #3DSandArt at Puri beach with message "Stop pollution Save earth ". pic.twitter.com/OKhy7lIe15

Since being shared just four hours ago, his Earth Day tweet has collected over 1,000 likes and much appreciation.

He is not the only person to lend his voice to the cause of Earth Day and plastic pollution. Others like cricketer Harbhajan Singh and actor Dia Mirza also took to Twitter to ask their followers to reduce their plastic use.

This #EarthDay let's make an effort to cut down on plastic products as much as possible, as they are very harmful to the Earth. I urge you all to help keep the environment safe. God bless #EndPlasticPollution

Celebrate #EarthDay with pledging to #BeatPlasticPollution! Say No to #SingleUsePlastics#BeatPollution#EarthDay2018#EndPlasticPollution#CleanSeas@AUThackeray@swachhbharat@UNEnvironment@UNinIndia@chinukofficial@AfrozShah1pic.twitter.com/Dusi5uT4DQ

The End Plastic Pollution campaign by Earth Day Network includes educating, mobilizing and activating citizens across the globe, promoting the reuse and recycling of plastic products and adopting a global framework to regulate plastic pollution.
Click for more trending news