"It was pretty big, biggest one I've ever seen!" said the person who filmed the video. 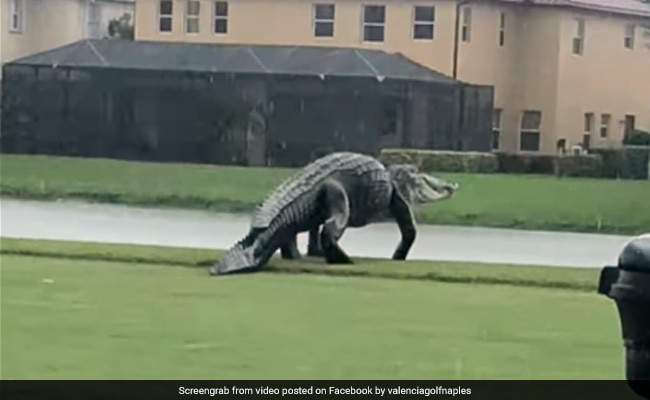 A huge alligator was spotted at a golf course in Florida.

A monster alligator was found prowling a golf course during Storm Eta in Florida. On Wednesday, the gigantic gator was seen marching across the grounds of Valencia Golf and Country Club in Naples.

While large alligators are not uncommon in Florida - residents share their state with roughly 1.25 million alligators - the size of this particular reptile raised eyebrows. Many compared the massive alligator to a prehistoric dinosaur. Tyler Stolting, who recorded the alligator making its way across the greens, said it was the biggest one he had ever seen.

"I was a little shocked, obviously," Mr Stolting, the first assistant golf professional at the club who took the video, told The New York Post on Thursday.

"It was pretty big, biggest one I've ever seen!" he said.

Valencia Golf and Country Club shared the clip on Facebook, where it has gone viral. Filmed from a moving vehicle, the video shows the gator walking as gale winds blew and rain fell during Tropical Storm Eta.

"Shut up!! That looks like a dinosaur," wrote one person in the comments section.

"His legs are longer than mine. Scary!" said another, while a third remarked, "Wow! That thing is massive."

According to Tampa Bay Times, Mr Stolting did not call authorities to relocate the gator, allowing it to go along into water. His co-worker Jeff Jones, when asked about the safety of golfers, said, ""As long as nobody's feeding him, they'll be fine."

American alligators are apex predators that feed on fish, reptiles, birds and small mammals. This is not the first time that a gator has been spotted at a Florida golf course. Earlier this month, one was spotted strolling at a golf course in Melbourne.