Construction Workers Rescue 'Dog' From Icy River. It Turns Out To Be A Wolf

The wolf had low blood pressure when it arrived at the veterinarian's clinic, which may have explained its docile nature 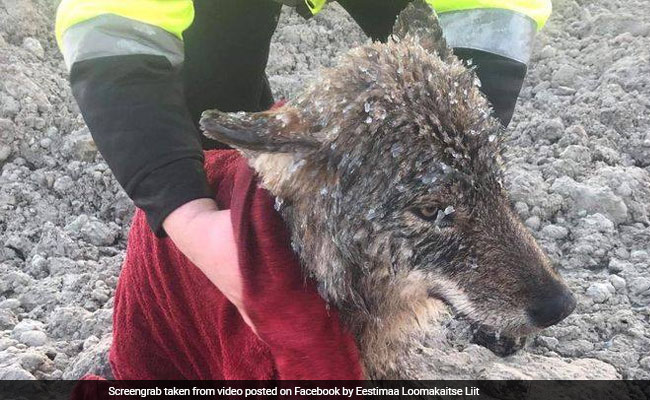 A dog rescued from a river in Estonia turned out to be a wild wolf.

A group of construction workers in Estonia rushed to rescue a dog from an icy river on Wednesday, not aware that the animal they helped was actually a wild wolf. A Facebook post detailing the unusual incident and sharing pictures of the wolf has now gone viral around the world with more than 2,000 'shares' and hundreds of comments.

According to Estonian World, the incident took place near the Sindi Dam on the Parnu river. Men working at the dam spotted the wolf trapped in icy water, and cleared a path so that it could swim to the shore.

It was only after they took the exhausted animal to a clinic that they were told it wasn't a dog, but a young wolf.

One of the men, Rando Kartsepp, said to Estonian newspaper Postimees: "We had to carry him over the slope. He weighed a fair bit.

"He was calm, slept on my legs. When I wanted to stretch them, he raised his head for a moment," he added.

The Estonian Union for the Protection of Animals (EUPA) said the wolf had low blood pressure when it arrived at the veterinarian's clinic, which may have explained its docile nature, according to BBC.

After its treatment, vets at the clinic decided to put the wolf in a cage, in case it became more aggressive after recovery.

The wolf recovered after a few days and was released back into the wild after being fitted with a GPS collar.

"We are so happy for the outcome of the story, and wish to thank all the participants - especially these men who rescued the wolf and the doctors of the clinic who were not afraid to treat and nurture the wild animal," EUPA said.

There are about 200 wolves in Estonia currently. In 2018, the wolf was chosen as the national animal of Estonia by several organisations.