The woman escaped with only minor injuries 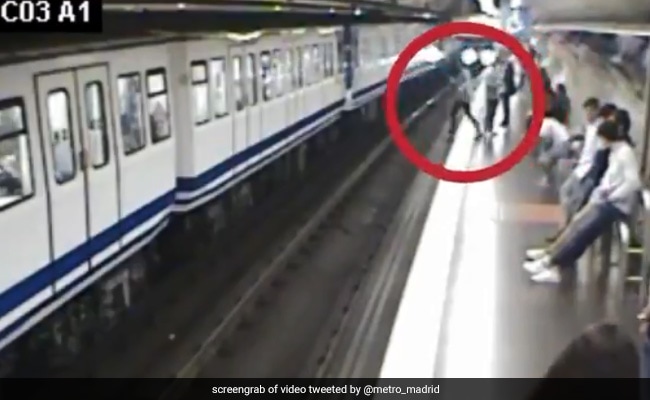 Officials in Madrid, Spain, are warning commuters to be careful on railway stations after a passenger was filmed falling onto the path of an oncoming train while distracted by her phone. Chilling surveillance footage released by Metro de Madrid on October 24 shows the moment that the unnamed passenger, busy on her phone, walks right off the edge of the platform and falls onto the railway tracks as a train approaches.

The incident occurred at Estrecho station in northern Madrid.

In the video, onlookers run to help the woman as a train approaches from one side. The video ends just as commuters rush forward to help her, so it is not immediately clear whether the train stops in time. According to CBS News, however, Metro de Madrid said that the woman was not seriously injured in the incident.

"In this case, nothing happened. The traveller is fine," Metro de Madrid wrote on Twitter after sharing the footage.

The video has collected a number of shocked comments, with many criticising the woman for being distracted by her phone.

Metro de Madrid used the video to warn passengers to be careful. "For your safety, look up from your mobile when you walk along the platform," they wrote in Spanish.

In September, alert RPF personnel managed to save the life of a man who slipped while trying to board a moving train at the Ahmedabad railway station.