From jokes about nosy relatives to reactions on the missing 1 mark for toppers, Twitter is sharing funny reactions to the CBSE class 10 results 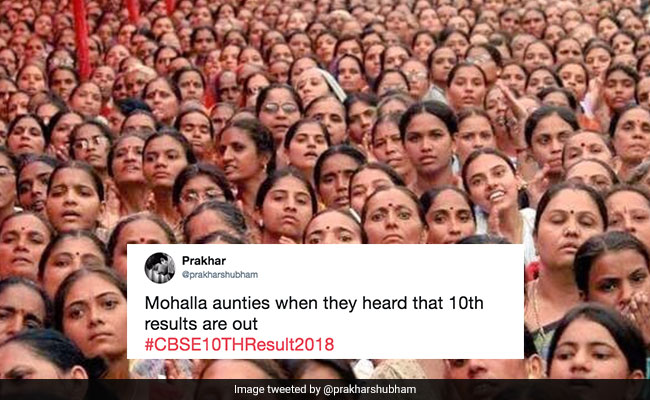 New Delhi: CBSE class 10 results 2018 have finally been announced, ending days of anxiety for more than 16 lakh students. Girls have outperformed boys with 88.67 pass percentage while boys have scored a pass percentage of 86.7. With the results out for the exams held back in March, four students have emerged as toppers with 499 marks out of 500. The list of toppers include Prakhar Mittal from DPS, Gurgaon, Rimzhim Agarwal from RP Public School, Bijnor, Nandini Garg from Scottish International School, Shamli, and Sreelakshmi G from Bhavan's Vidyalaya, Cochin. As students evaluate their scores, Twitter is buzzing with reactions to the results. The hashtag #CBSE10thResult2018 has been trending on the mirco-blogging site from the moment the results were declared this afternoon.

From jokes about nosy relatives to reactions on the missing one mark for the toppers, Twitter is at it sharing some funny reactions to the CBSE class 10 results. Here are some of the funniest reactions.

Mohalla aunties when they heard that 10th results are out#CBSE10THResult2018pic.twitter.com/Y39TRtyOKK

What is happening in some families right now:#CBSE10THResult2018pic.twitter.com/KNeUOdoJtb

looking at #cbse10thresult2018 4 topper OMG.. right now I am more curious about where they lost 1 mark ??

CBSE result announced!! Now you have your date of birth proof.
#CBSE10THResult2018

Dear students, who passed the CBSE 10th class today, if anyone tells you that you have to study for two years then it's all fun, don't fall for it. It is a trap! #CBSE10THResult2018

When you anticipate 60% but get 60.5#CBSE10THResult2018pic.twitter.com/ofp5syaBmw

Promoted
Listen to the latest songs, only on JioSaavn.com
The results can be checked on CBSE's official website (www.cbse.nic.in), NIC hosted result portal (www.cbseresults.nic.in), Google and Bing search page, and SMS Organizer and UMANG apps.

On May 26, CBSE class 12 results were announced. Similar memes and jokes flooded Twitter. Tweeple even invoked the Race 3 "Our business is our business..." meme and used the poster for Ranbir Kapoor starrer Sanju to share their reactions.Click for more trending news