The powerful message grabbed the attention of many users. 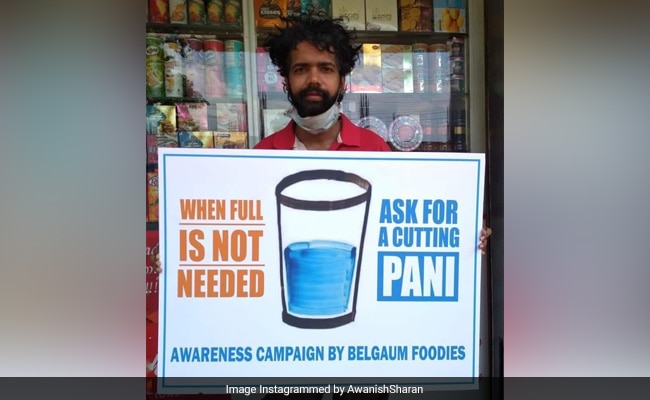 The post was shared on December 2 and since then it has amassed over four thousand likes.

Awanish Sharan, an Indian Administrative Service (IAS) officer, often shares motivational and informative posts on his social media handles. This time around, he shared a photo on Twitter on the growing importance of saving water.

The photo shows a man standing with a placard in his hand, which reads, "When full is not needed, ask for a cutting pani." This powerful message grabbed the attention of many users and they appreciated sending a strong message with such simplicity.

"Take half a glass of water in a hotel-restaurant. Ask for more only when necessary," says the caption of the now viral post.

The post was shared on December 2 and since then it has amassed over four thousand likes.

"With you on this," said one user.

A second user commented, "I saw similar campaign in many hotel restaurants also already. A very nice campaign, we should encourage this more and more."

Adding a suggestion, another person remarked, "We should Apply it at office and home too, Mr. Sharan sir"

"But most of the restro provide only packed water bottles.. They don't care about requirement... I think that's create more plastic waste as well as wastage of water. Even they don't refill the bottles," said one person.

A few months ago, the bureaucrat had shared a video of a blogger helping a 75-year-old woman working as a ragpicker start a new life as a vegetable seller. He helped the elderly woman buy a cart, weighing machine and vegetables to start the business. The blogger even bought groceries to fulfill her daily requirement at home.