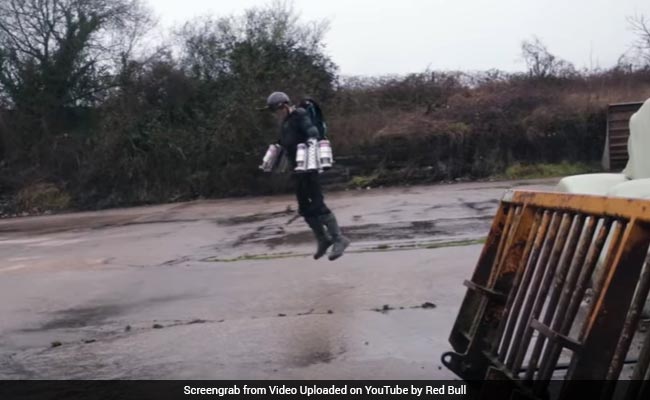 London: An amateur inventor in the UK has built an Iron Man-like jet engine-powered exoskeleton suit that enables him to hover in the air like a superhero. The futuristic ensemble consists of three sets of miniature jet engines attached to the arms and the back.

Richard Browning, a 38-year-old oil trader, had been secretly experimenting in his garage for 18 months, before he figured out the optimal number and position of the jet engines that allows him to fly with a minimal amount of equipment.

"The human body is very good at being trained to do specific things, and it's a useful structure, and the human mind is a pretty amazing machine," Browning said.

"So, we had this idea - rather than go and rely on aluminium structures to build the machine, rely on gyros and computers in order to achieve stability, why not rely on the human machine, keep it as raw and original as possible?" he said.

Piloting the device takes quite a lot of personal strength and body coordination, said Browning.

There is no steering mechanism, and speed and direction can be adjusted only by changing the direction of the engines' thrust, solely using upper-body strength.

The inventor added that he was inspired to create the suit by the Greek myth of Daedalus, who made himself wings to escape from captivity. The suit takes its name from the myth.

Currently, Browning can stay in the air for up to 10 minutes using the exosuit. He has kept his experiments at a running speed of about eight kilometres per hour and an altitude of only one to two metres above the ground.

Promoted
Listen to the latest songs, only on JioSaavn.com
Eventually a user could fly over 100 kilometres per hour and to an altitude of about 100 metres, Browning said.