Brawl Breaks Out On Flight, Passengers Throw Punches At Each Other

According to the passenger who posted the video the fight broke out between the British nationals due to one group passing a racist comment against a fellow passenger. 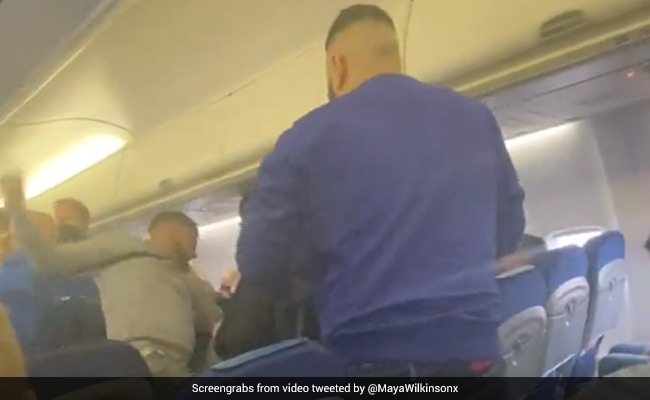 Six passengers on a KLM flight from Manchester to Amsterdam got into a huge brawl aboard the plane before being arrested and taken away by the police on Thursday. In the video posted by Twitter user @MayaWilkinsonx, two of the men can be seen holding a passenger down as another group rails punches on him. The captain of the flight can be seen attempting to break up the fight, but the attempt is largely unsuccessful. According to the passenger who posted the video the fight broke out between the British nationals due to one group passing a racist comment against a fellow passenger.

As the video progresses, the cabin crew can be heard attempting to calm the situation down with even the pilot making a similar appeal. According to Dutch News, one of the six passengers involved in the fight was slightly injured. The Dutch Military Police who are in charge of airport security have confirmed the incident and stated that they have started an investigation into the behaviour of the six British men.

According to The Daily Mail the passenger who posted the footage on Twitter said, “We'd just landed in Amsterdam, it was brewing the whole flight really…They almost fought half way through the flight. I was sat a couple of rows back, they ended up saying something racist to an Asian lad and he started shouting but it got split up…They were about to leave and as they were getting their bags out of the overheard locker they started to fight.”

A spokesperson for the airline said on Friday, “Yesterday we had some unruly passengers on our KLM 1070 flight from Manchester to Amsterdam. The captain and cabin crew put an end to a brawl between two groups of passengers. All involved were arrested upon arrival at Schiphol Airport. No delay occurred. KLM does not tolerate aggression against employees or passengers. We apologise to our passengers who may have been affected by the incident.”