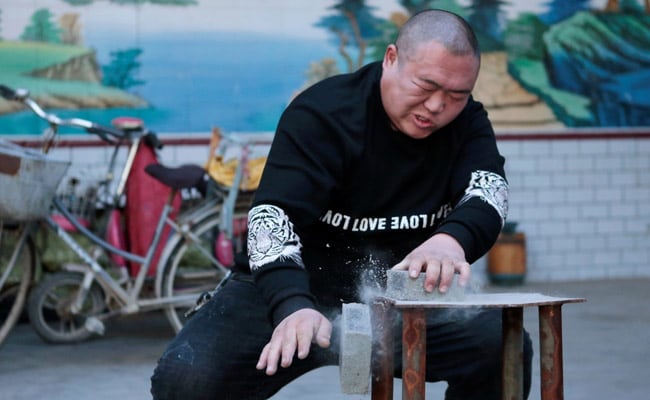 In a short online video, a Chinese man with a round face and a buzz cut pops open a beer cap with a single chopstick.

After a sip, he quickly lifts the bottle to his mouth while giving it a few sharp turns.

A small "tornado" forms in the bottle, and Hebei Pangzai, or "Fatty from Hebei province", as the 34-year-old is known on Twitter, drinks it all in seconds.

The odd job labourer hails from Zhengyuansi, a nondescript village where everyone knows everyone.

Thanks to the internet, Liu now has over 130,000 followers on Twitter, drawn to his beer-drinking clips. This week, he even had three new American friends visit him in his village

In the video, Liu opens a beer bottle with a chopstick, mixes the beer with several other liquors, including baijiu, a potent Chinese liquor made from grain.

He lights the concoction, uses his finger to carry off a bit of the flame to light his cigarette, then drinks the whole thing.

He said he knew something was up when he first got hundreds of new followers on Kuaishou, a short video-sharing platform popular among people in small Chinese cities and the countryside. All of them wrote their comments in English.

After some internet sleuthing, Liu got onto Twitter, which connected him to an audience outside of China.

Today, I accepted an interview to make some brick chopping and drinking videos. Share them with you, have a nice weekends, friends! pic.twitter.com/Zi1NGBwvFo

He declined to say how exactly he logs on to Twitter.

While software to circumnavigate China's Great Firewall is not technically banned, it remains a murky legal area.

"One of the first videos I saw was a brick-breaking video," he said.

"Those videos looked fake, and I thought I could do a real one." So he did.

He also started making the drinking videos, and later, cooking videos.At the peak of his fame on the Chinese internet, he had more than 400,000 Kuaishou followers.

As for his current fame, Liu remains sceptical about becoming a career influencer. "You can't depend on this for a living. This is just for when I have some free time."