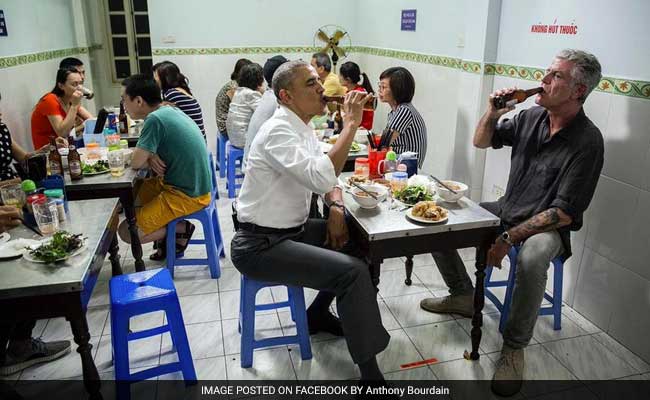 Hanoi, Vietnam: She has ladled out countless bowls of her pork noodle soup, but the owner of a Hanoi streetside restaurant says she was stunned when Barack Obama strolled in, pulled up a plastic stool and slurped down Vietnam's famed "bun cha" delicacy.

The US president slipped away from his hectic Vietnam visit on Monday night to sample the dish with Anthony Bourdain, a chef and food critic who fronts a travel show about hidden culinary gems around the world.

While 54-year-old restaurant owner Nguyen Thi Lien knew a foreign television crew was on the way, she had no idea they would be bringing a very special guest.

"His presence in our restaurant was a great surprise for my whole family, who could never have imagined it, even in our dreams," she told AFP on Tuesday.

A large crowd gathered outside the restaurant, letting out a cheer as Obama exited. 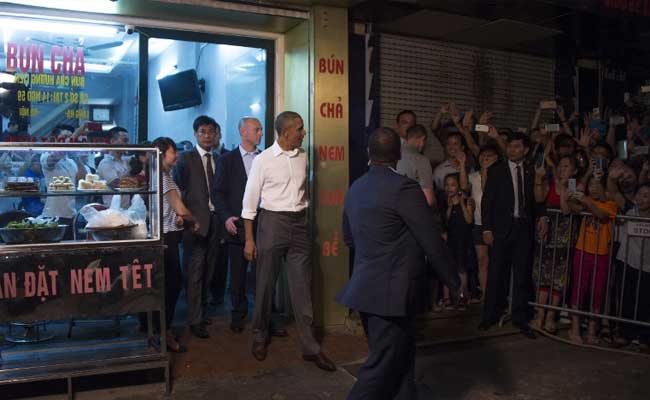 Surrounded by a coterie of bodyguards, he stopped to greet excited locals, many capturing the moment on their phones, before being whisked away in his limousine.

"Obama was nice, smiling, cheerful and popular with everyone," the shop's owner told AFP, adding that she regretted not posing for a picture with the president.

Bourdain posted a picture of the dinner on his Instagram feed with the caption "The President's chopstick skills are on point".

The President's chopstick skills are on point . #buncha #hanoi

It showed the two sitting on tiny plastic stools that are a common feature of Vietnamese street restaurants, Obama clasping a bottle of Hanoi Beer in his right hand.

Local diners could be seen sitting at stainless steel tables behind the pair tucking in to their own steaming bowls of broth, one wearing an American-style black baseball cap.

"Total cost of bun cha dinner with the President: $6.00. I picked up the check," Bourdain, who is renowned for his love of cheap streetside food, later tweeted.

Vietnam is known for its fresh ingredients and healthy cuisine but Obama's choice of bun cha, which with its fatty pork and sweet broth is at the more gluttonous end of the country's culinary spectrum, might have raised the eyebrows of his wife Michelle who has long campaigned for healthy eating.