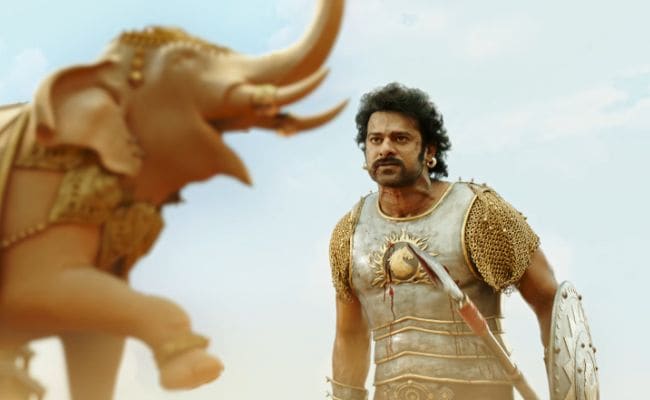 A still of actor Prabhas from the trailer of Baahubali 2: The Conclusion.

NEW DELHI: After waiting for two years to find out why Katappa killed Baahubali, fans of SS Rajamouli's magnum opus can finally get some closure. Baahubali 2: The Conclusion, starring actors Prabhas, Rana Daggubati, Anushka Shetty, Sathyaraj, Tamannaah Bhatia and Ramya Krishnan, finally hit 8,000 screens across the world. With the film's early morning shows, starting as early as 7:30 am, Twitter is buzzing with heaps of praise for the film. Fans have been tweeting with #Bahubali2 making the hashtag trend on Twitter.

The film opened to a grand release earlier this morning with fans queuing for miles outside theatres to watch the much-awaited film. The Baahubali 2-fever has been so high in places like Hyderabad, people celebrated the release by pouring milk on life-sized cutouts of the film's star Prabhas - much the same way fans celebrate a Rajinikanth film.

The fantasy drama is the second part to Baahubali: The Beginning released in 2015. The film was a huge success and ended in a cliffhanger which subsequently became a huge phenomenon on social media. Jokes and memes on 'why Katappa killed Baahubali?' became extremely popular online. Now, along with words of praise for the second and final installment of the films, tweeple are also requesting everyone who has seen the film to not share any spoilers online.

It's not blockbuster it's a Baaahubalian Hit. Unlimited goosebumps and unlimited repeat value. Hero of hero's @ssrajamouli#Baahubali2

When your friend doesn't reveals why katappa killed bahubali #Bahubali2pic.twitter.com/QGYwIEc0aC

#Baahubali2 fever grips Hyderabad. Will it breach Rs 1000cr mark? Depends on the much-awaited answer to *Q of the Year* Why Kattappa... ..

The effects are top notch & the story is classic. A must see for any film fans. The Best film of 2017, Best movie ever made! #Baahubali2

Along wth interval , post and pre elevations elevations of it are still haunting take a bow @ssrajamouli garu #Baahubali2

People can finally sleep in peace, now that they know why Katappa killed Baahubali.#suchburningquestions

Packed audience.
An amazing first half from SS.
Stupendous performance from all the lead actors.#BahubaliTheConclusion#Bahubali2pic.twitter.com/QeFJz5ptfp

Baahubali 2 has released in several languages including Telugu, Tamil, Hindi and more. It is said to be the year's biggest film. It comes as no surprise then that several fans have taken half day off at work to watch the film on the first day itself. "Convinced our bosses 20 days earlier. We will work 30 minutes extra every day and make up. But you have to let us watch it on the day of release," fans outside Mumbai theatres told NDTV.

Promoted
Listen to the latest songs, only on JioSaavn.com
Are you planning to watch Baahubali 2: The Conclusion this weekend? Tell us using the comments section below.