Over the past few days, several interpretations of Amrita Rao's Jal lenge' meme have gone viral on social media. 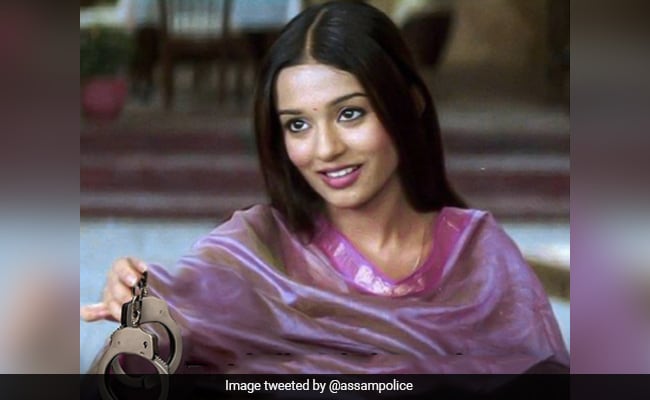 Assam Police's warning to drug peddlers came with a meme.

The Assam police have started raising awareness about the rampant peddling of drugs in the state through catchy and funny posts on social media. The police intensified its crackdown on the illegal drug trade after Chief Minister Himanta Biswa Sarma took over last month. Recently, they shared a meme on Twitter about the menace and warned drug peddlers of jail terms if they didn't stop trading in illegal psychotic substances. In a Twitter post shared yesterday, the police said “if the neighborhood drug peddlers have vanished into thin air, well, that's on us”. They added, “The inconvenience is not regretted!”

The image shared in the post is a spin to a scene from the 2006 movie Vivah, starring Shahid Kapoor and Amrita Rao.

If the neighborhood drug peddlers have vanished into thin air, well, that's on us.

The inconvenience is NOT regretted! #AssamSaysNoToDrugs#WarOnDrugspic.twitter.com/1xKDLlpNqZ

The police have launched operations to seize narcotic substances and arrested several people over the past few weeks. A number of people have praised the police action against drug peddlers and shared their appreciation for the department on the Twitter post.

A user said the police force was doing “fantastic work” by arresting the “destroyers of humanity” and guided officials to places where the menace is rampant.

@gpsinghassam@himantabiswa Fantastic work in arresting these destroyers of humanity.The railway tracks in Silpukhuri, especially behind the pond & the market,are filled with antisocial elements.Maybe a raid there would help?Thanks once again!

Well done Assam Police. Salute to you guys. Keep it up.
Jay Hind

Many appreciated the wit of the police in raising awareness about illegal drugs.

On Wednesday, Assam Director-General of Police (DGP) Bhaskar Jyoti Mahanta said 35 arrests were made and 20 cases registered on Sunday alone. DGP Mahanta told reporters in Guwahati that the seizure list from that day consisted of 469.7 grams of heroin, 574.31 kg ganja, 1,499 tablets, and Rs 20,700 in cash.

Assam CM Mr. Sarma also congratulated the police team on their success in curbing the menace. "Good work by Assam Police to address the menace of narcotics."

Substantial success on May 31:

The DGP had then also referred to poppy farms being the main source of drug production.

Over the past few days, several interpretations of Amrita Rao's ‘Jal lenge' meme have gone viral on social media. In the original scene from the film Vivah, Ms. Rao's character, Poonam, offers a glass of water to the guests and says ‘Jal Lijiye' (please have water).

Variations of the meme soon blew up on various platforms. From the recent F.R.I.E.N.D.S reunion episode to the many facets of Indian mothers, several jokes found the meme to be a perfect fit. Some organisations, such as Jio, even used the meme as a marketing tool.

Remind your loved ones to 'drink water' in the comments below????

In an Instagram video recently, Ms. Rao, too, reacted to the memes. She wrote in her caption: “Jal Lenge.”

Ms. Rao added the hashtags #jallijiyememes, #vivah, and #rajshriproductions to her post.