Amul's Ad On Shashi Tharoor Is Hilarious, But His Response Takes The Cake 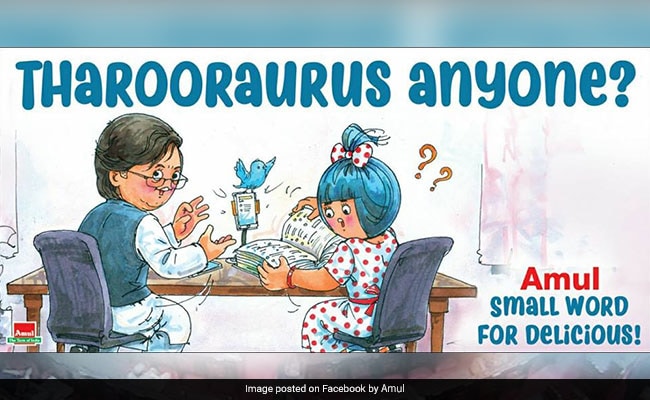 Amul immortalized Shashi Tharoor's well-known penchant for obscure words in a witty creative yesterday, but it was the parliamentarian's response which took the cake. Famous for its topical ads, Amul took a good-natured dig at Mr Tharoor's habit of using words which often left Twitterati reaching for their dictionaries by tweeting a creative that took on the 'MP's fondness for tweeting big words like 'Rodomontade'!'

"Tharooraurus anyone?" read the ad which had Twitter laughing out loud.

In response, Mr Tharoor tweeted that while he was 'butterly honoured' to be featured, he felt like a 'Tharoorosaurus Rex' or an 'ancient creature soon to be extinct, snuffed out in a cloud of incomprehension....'

Butterly honoured. But I feel like a Tharoorosaurus Rex, an ancient creature soon to be extinct, snuffed out in a cloud of incomprehension.... https://t.co/2VnkHlla1c

People loved Mr Tharoor's play on Tyrannosaurus Rex. Here's what they had to say:

For once.. I didn't hv to use dictionary to understand ur tweets

His tweet has been 'liked' over 1,000 times since being shared just eight hours ago.

Promoted
Listen to the latest songs, only on JioSaavn.com
Amul's creative came after Mr Tharoor took to Twitter on December 13 to address everybody who parodied his style of writing and speaking by saying that he chose his words to fit the ideas he wanted to convey and not because they are obscure or rodomontade ones.

To all the well-meaning folks who send me parodies of my supposed speaking/writing style: The purpose of speaking or writing is to communicate w/ precision. I choose my words because they are the best ones for the idea i want to convey, not the most obscure or rodomontade ones!