'Aliens' In Viral Video With 12 Million Views Turn Out To Be...

The 'alien' video was filmed in 2017 and recently resurfaced online 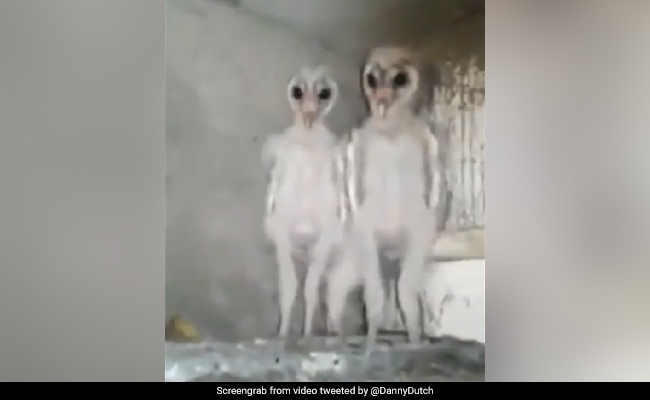 A viral video shows a pair of unusual-looking owls.

You could be forgiven for thinking that this viral video shows aliens in real life. The video, which is going viral online with over 12 million views, features two white, mysterious-looking creatures with huge eyes - and people seem stunned to learn what they actually are. Filmed in 2017, the old video resurfaced on Twitter after it was shared by a user who implied that it could help explain a number of alien sightings.

The creatures filmed in the video are not extraterrestrial beings but actually, simply... eastern barn owls. Take a look at the video below:

Since being shared online again four days ago, the video has collected 12.3 million views and over 1 lakh retweets. Take a look at some of the amazed reactions the eerie-looking baby owls have garnered:

Stop it. That is too much. I'm going to buy them a little space ship 🛸

Me: how bad could this be, people are totally overreacting, let's look at these lil fluffers---

If I heard a noise, looked up in my crawl space and saw this...
I swear to GOD I'd be watching my house burn on the news from three states away

According to Daily Mail, the video was filmed at a construction site in Visakhapatnam, Andhra Pradesh, over two years ago. The birds in the video are eastern barn owls moving towards adulthood, and the reason they look spooky in the video is probably because they are alarmed.

"Their heart-shaped faces and downward beaks are characteristics of the species. When birds get attention, they tend to be observant in behaviour, which is probably why the birds look alarmed," explained Nehru Zoological Park curator Shivani Dongre to Daily Mail. "As it was a construction site, the birds were on a flat surface. If they had a surface to grip on, we could have seen them perch."