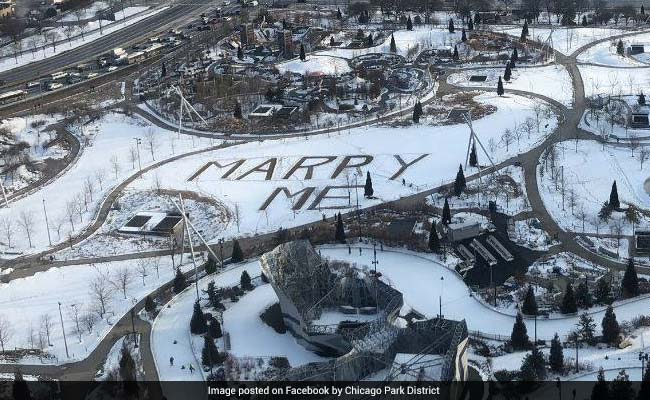 The "Marry me" message took six hours to make in the snow.

Talk about a grand gesture! A Chicago man who spelled out "Marry me" in the snow for his girlfriend to read is now going viral online. A picture of the huge proposal message was shared online by Chicago Park District on Wednesday. "Someone just popped the big question at Maggie Daley Park," they wrote. "SHE SAID YES!" they added, informing curious viewers that the romantic proposal was also successful.

According to WGN9, the man behind the message is Bob Lempa, who wanted to spell out the proposal in massive letters so that his girlfriend could see it from the 37th floor window of her office.

"I had been by Maggie Daley Park a number of times just getting the feel of where I could do it, how big it would have to be, because Peggy's on the 37th floor so I knew it had to be big to be seen," Mr Lempa said.

On Tuesday, he spelled out the message on snowy grass. The letters were 45 feet tall and 31 feet wide, and took a little over six hours to make, reports WGN9.

His girlfriend Peggy Baker  says the proposal was a complete surprise.

"Other people had noticed it earlier but I hadn't noticed it until I saw a few other people looking out the window, so I knew something was going on but I really didn't know it would be for me," she said. "It was so huge, and a big and bold statement,"

In 2017, a video showing a TV reporter getting surprised with an on-air proposal went viral on the Internet.