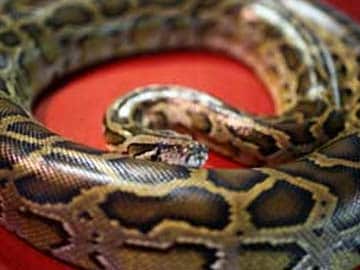 SHARON, Pittsburgh: A 62-year-old woman says she discovered a python on her bathroom floor when she went to her toilet during the wee hours of the morning.

Debbie LaMotte tells The (Sharon) Herald that she first thought the snake was a scarf lying on the floor "because it had such a beautiful pattern." But when she prodded it with her cane, the snake's head moved.

The incident happened about 4 a.m. Tuesday at her apartment in Riverview Manor in Sharon. That's about 60 miles northwest of Pittsburgh.

Promoted
Listen to the latest songs, only on JioSaavn.com
Police came in and, LaMotte says, wound up using her "old lady grabber" - a long-handled device that helps people pick up items without bending over - to lift the snake into a bag.

She believes the snake may have been a slither-away pet that squeezed under her front door.
Comments
snakesnake in toiletpythonPittsburghDebbie LaMotte