"The girls were discovered sitting next to the dead bodies and later found roaming about their home (now a crime scene)" said Antara Naik in her Facebook post. 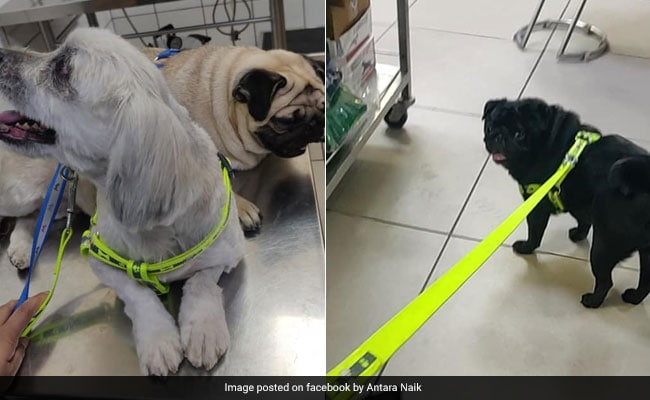 Lola, Mouli, Blue and Pippa are now being cared for at an animal shelter.

Four dogs that were rescued from a crime scene in Gurgaon on Tuesday are now being taken care of by a Delhi-based group. Lola, Mouli, Blue and Pippa were brought to an animal rescue group, All Creatures Great And Small, after their family was found dead. The police say their owner, a Hyderabad-based chemical factory employee, allegedly slit the throats of his wife and children before killing himself at his Gurgaon home on Sunday night.

"The girls were discovered sitting next to the dead bodies and later found roaming about their home (now a crime scene)" said Antara Naik in her Facebook post. Ms Naik was part of the team that facilitated the rescue.

According to her Facebook post, the four dogs were rescued after an intervention from former minister Maneka Gandhi for the quick rehabilitation of the dogs.

"The girls were handed over to us by the end of the day following which they have been placed in safe custody of Anjali Gopalan AWBI Board Member and Founder All Creatures Great and Small India," said Ms Naik in her post.

Named Lola, Mouli, Blue and Pippa, the four dogs were all found to have various health issues. According to Ms Naik, they were found in a state of "extreme trauma and physical distress."

The dogs are now receiving medical attention and care at the NGO, and their condition is improving.

"All SOS treatments have been provided to the girls and within the last two days they have shown remarkable recovery wherein they are eating properly, are much more responsive and active," said Ms Naik in her post.

Ms Naik's post has received a flood of responses, with many contributing for the treatment of the rescued dogs.

The dogs are not up for adoption right now.