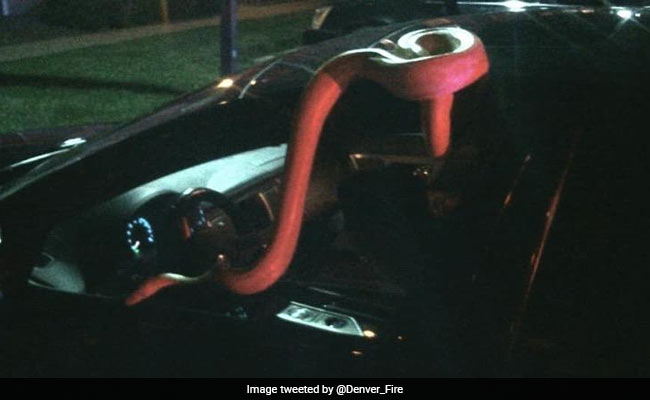 Firefighters found a 15-foot snake slithering out of a car in Denver.

When firefighters in Denver, Colorado, responded to reports of a man passed out in his car, they arrived at the scene to find something much scarier - a 15-foot snake crawling out of the vehicle's window.

On Sunday, the Denver Fire Department shared photos of the snake trying to escape the car where its owner was passed out from alcohol consumption.

"Engine #29 found a party passed out in his car, while his 15ft. snake was crawling out of the driver's side window on to the roof!" they wrote on Twitter, before asking people to stop drinking and driving - especially with pet snakes in the car.

More animal adventures this weekend for the DFD, this time the reptile type. Engine #29 found a party passed out in his car, while his 15ft. snake was crawling out of the driver's side window on to the roof! Don't drink & drive, especially with your pet snake in the car! #BeSmartpic.twitter.com/zxrHVZL65g

The pictures, shared on both Facebook and Twitter, have been widely circulated online, collecting a ton of comments.

"Even snakes are smart enough to know not to be in a car with an intoxicated driver behind the wheel," quipped one person in the comments section. "Thanks DFD for saving the snake!" said another.

Police hasn't released any information on whether the snake's owner was cited for driving under the influence.

Last year, a man from New South Wales, Australia, received a shock when he found a venomous red-bellied black snake tapping on his car window while he drove.