The probe has been launched amid his son's allegations that he had to pack his father's body, found coronavirus positive shortly after his death, all alone without any help from medical authorities. 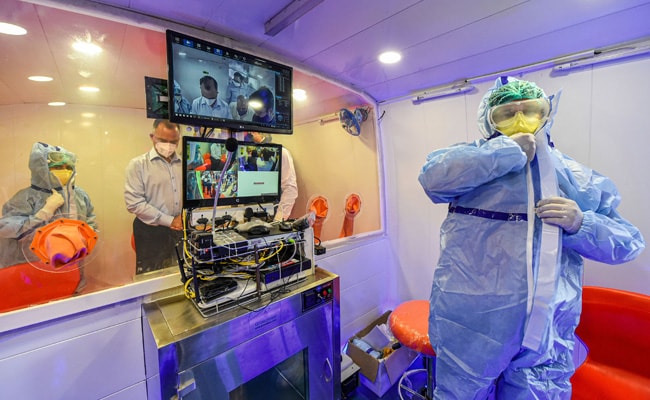 The man said he could procure his father's test result nearly 11 hours after his death.

A probe has been ordered into the death of a 68-year-old man, who had to shuttle between three hospitals to give his sample for a COVID-19 test and return home where he died a few hours later before the result came, an official said on Thursday.

The probe has been launched amid his son's allegations that he had to pack his father's body, found coronavirus positive shortly after his death, all alone without any help from medical authorities.

The man had to shuttle between three hospitals, including the state-run Government Institute of Medical Sciences in Greater Noida, before being tested for the COVID-19 at a private facility on June 8, said officials.

"He gave his sample around 12.45 pm at the private Sharda Hospital, a dedicated COVID-19 facility, and was found positive for the infection in the report the next day," sources privy to the development told PTI.

However, the man had to return home in Sector 82 after giving the sample and before its result came as it was difficult for him to wait outside in hot summer, they said.

"My father died at 6.05 am the next day," his son said in a WhatsApp message, circulating on his society's social media group.

"As my father's test results were still awaited, no one could suggest what to do with the body. As a COVID-19 suspect, no one wanted to come forward to help either," he said.

He said he could procure his father's test result only at 5.30 pm, nearly 11 hours after his death, after making a lot of efforts and persuasion, he said.

"Subsequently, after endless follow ups, we were given a body bag at 7.30 pm to pack the body ourselves," he said.

"With no helping hands around, I and my wife wore PPE (personal protective equipment kit) and packed the body with only the ambulance driver pitching in to our help," he said in his WhatsApp
message.

"The last rites were performed at 11 pm at the Sector 94 crematorium," he added.

The government rules stipulate that the body of any COVID-19 positive or a person has to be handled by local administration and packed in a body cover, said officials.

Gautam Buddh Nagar Chief Medical Officer Deepak Ohri on Wednesday had told reporters that the "matter was being looked into" and the "matter would be probed".

When contacted, Sharda Hospital spokesperson Ajit Kumar told PTI, "We have only followed the Indian Council of Medical Research guidelines and the patient left on his own for home quarantine."

ICMR protocols provide that a person with COVID-19 symptoms has to be first tested and then admitted after the result is found positive, but sent home if it is negative.

It also states that asymptomatic people can go home after a test but need to stay quarantined at their residence till the result is not out.