Woman delivers baby at Mumbai local train station in Virar. The mother and the baby are in good health and have been admitted to a hospital. 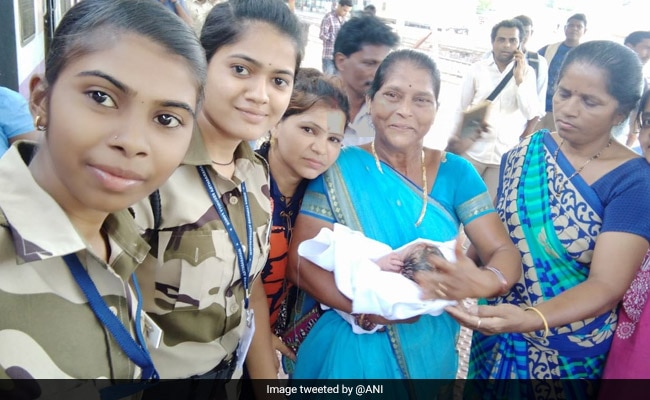 Woman poses with the baby and security personnel.

A 22-year-old woman delivered a baby on a local train coach at Mumbai's Virar station, earlier today. The mother and the baby are in good health and have been admitted to a hospital, reports news agency ANI.

On Thursday, a 36-year-old woman delivered a baby at the Virar railway station near after she went into labour on her way for a regular medical check-up.

The woman, Sweety Sheikh, who was travelling in a local train, began feeling labour pain at around 7.15 am. She got off the train at Virar, where she was escorted to the Government Railway Police office located at the station.

Head constable Priyanka Mane arranged curtains to cover the office where Sweety delivered the baby after some time.

Last week, on-board the Konkan Kanya Express, a 20-year-old woman went into active labour and was taken to "One Rupee Clinic" at Thane station when the train stopped.

On April 7, a woman delivered a baby boy at the Thane railway station after she went into labour while travelling to Kurla. The woman officials of the Railway Protection Force took the woman to the "One Rupee Clinic" where the staff helped her deliver the baby.