Around 200 Shiv Sainiks demonstrated outside the offices of private builders and the MMRDA seeking an immediate end to their ordeal. 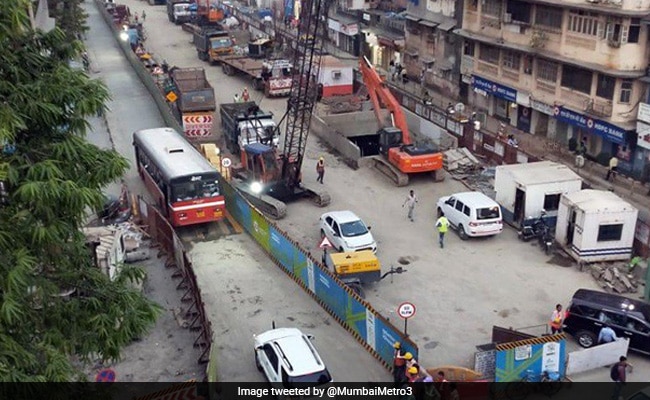 The construction of the metro has resulted in narrow roads, heavy traffic across Mumbai

Sena leader Pandurang Sakpal said that the work of Mumbai Metro, constructed for the Mumbai Metropolitan Region Development Authority (MMRDA) and some private builders like DB Realty have undertaken huge infrastructure and redevelopment projects in the vicinity.

"Since past many months they have made life a torture for the locals. The narrow roads are jammed round-the-clock by heavy vehicles of the MMRDA and the private builders, making movements impossible," Mr Sakpal told IANS.

Another Shiv Sena Leader Ravindra Nirlekar said though the government has banned the entry of heavy vehicles like trucks and dumpers within the city limits during daytime, "the rules are blatantly flouted in connivance with the police, traffic department and government officials".

Former corporator Dilip Naik said the roads in the vicinity have already come under restrictions for the Mumbai Metro project and with these heavy vehicles plying 24 hours, they are further narrowed.

"The people have been complaining since long to stop them, but there is no relief. For traversing a 2-km stretch it can take two hours, school buses are delayed, medical emergencies cannot be handled and even normal movement of pedestrians is badly hit," Mr Naik said.

"We have demanded a probe into who has authorised the entry of heavy vehicles in these areas which is creating so much pollution, traffic hazards, damaged roads and health problems to the citizens," Mr Nirlekar said.

Around 200 Shiv Sainiks, accompanied by the local residents, staged a demonstration outside the private builders' offices and the MMRDA seeking immediate end to their ordeal.