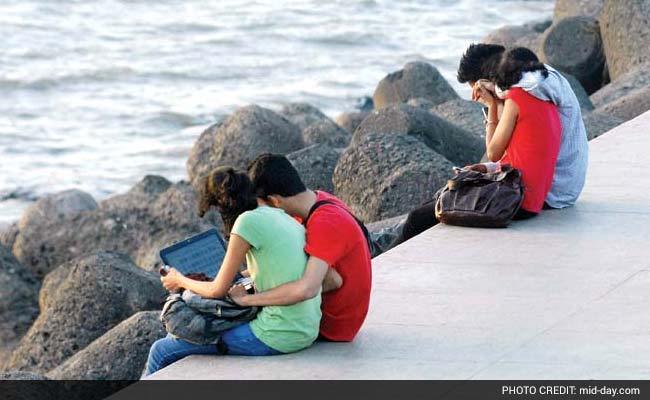 The law has been used to target people for as little as hugging in public. (File pic for representation)

Mumbai: This could very well be the end of moral policing in the city - Mumbai Police, who had recently come under a hail of criticism for harassing citizens with the dreaded Section 110 (public indecency) of the Bombay Police Act, 1951, have decided they will no longer take action against anyone under that provision.

Cops have used this law several times to target couples in the city, most notoriously in August, when they had rounded up 40-odd couples from hotels at Madh Island and Aksa and charged them for public indecency.

But this act of moral policing was met with severe backlash from citizens, and the then commissioner Rakesh Maria issued a stern order to cops to stop harassing couples in public places. Despite this, just this month, another couple in Andheri were also targeted under this law, as cops manhandled them at the police station (see History of misuse).

Now, in a high-level meeting last week, top cops decided to nip the problem in the bud. Although the police cannot amend laws, they have passed strict instructions that Section 110 not be used under any circumstances. In addition, the order - passed by Joint Commissioner of Police (Law and Order) Deven Bharti - also forbids action under Section 151 of the Code of Criminal Procedure (CrPC), which allows an officer to arrest a citizen - without a warrant or a Magistrate's order.

When mid-day contacted Joint CP Bharti, he said, "If a couple is walking and they have a small fight or are busy on their own, the police have no right to interfere. Even if there are anti-social elements, action should be taken according to law, and only after asking the senior officer of the police station."

But this is exactly what some cops fear will compromise their ability to take swift action against criminals. "It was a good decision, but now our hands are tied by the order. Even if someone is doing something wrong, we will be forced to just watch or at the most, give them a warning. The order should have been specific to only couples, as they are the ones who have had to face moral policing under Section 110," said one police officer who did not wish to be named.'

Section 110 of the Bombay Police Act, reads: 'No person shall willfully and indecently expose his person in any street or public place or within sight of and in such manner as to be seen from, any street or public place, whether from within any house or building or not, or use indecent language or behave indecently or riotously, or in an office station or station house.'

>> November 2015: A couple was targeted by the Andheri police, who spotted them arguing in public. The cops hauled the couple to the police station at midnight, where they were manhandled and held for hours, before being slapped with a Rs 1,200 fine under Section 110.

>> February 12: Cops filed an FIR against those who organised and participated - including Karan Johar, Deepika Padukone, Ranveer Singh and Arjun Kapoor - in the AIB Knockout show held in Worli on January 20.

>> August 2015: mid-day broke this story on how 40-odd couples were hauled out of hotel rooms by the Malwani Police and harassed for hours. They were humiliated endlessly and fined Rs 1,200 under Section 110.

>> September 2014: A couple sitting on a bench outside Oberoi Mall in Goregaon were picked up and charged under Section 110 and fined R1,200 because the man had his arm around the woman's waist.

>> May 2014: Model Poonam Pandey was sitting in her car when she was picked up by the police because her dress was too short. Cops said she was taken to the police station for her safety.

In 2012, mid-day had highlighted how Kuber Sarup was charged by the Khar police in 2012 when he gave a friend a hug and a peck on her cheek. However, he contested the charge in a year-long legal battle and was finally acquitted.

He spoke to this reporter about the police's decision to stop using Section 110: "Better late than never. I am extremely delighted by the decision. It is not a matter of the R1,200 I was fined; I spent a lot more money and 14 months for the charge against me to be revoked. A kiss on the cheek or holding someone's waist is not indecent at all. Are we living in a Taliban regime?

In a message sent to senior police inspectors at all police stations (mid-day has access to it), the order states:
>> No action to be taken under Section 110 of BP Act and 151 CrPC under any circumstances

>> No arrest without notice to the accused; guidelines of the Supreme Court must be followed strictly

>> Without the knowledge of the Senior Police Inspector, no officer will arrest any accused; senior officials will first verify the grounds for and the circumstances of the arrest

I wish the decision had been taken before I was caught in the Madh Island raid. I was in the hotel with my fiance, enjoying some privacy behind locked doors. How could cops enter the room and tell us we were being indecent in public? - A 25-year-old woman

I was with a friend inside the hotel room; we are both consenting adults. I was humiliated by the cops. My parents were called to the police station. I thought of committing suicide. It is good that now, such action can't be taken anymore. Cops should stay away from our personal lives. - A 22-year-old woman