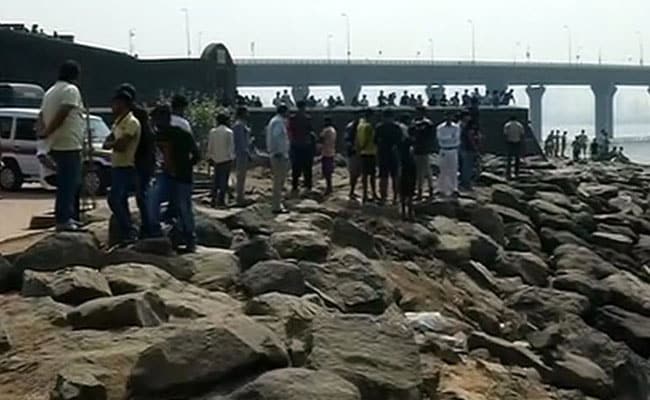 The rocky sea shore in Bandra where the incident took place on Saturday.

Mumbai: The body of a 40-year-old man, who was swept away while trying to rescue three girls who fell into choppy sea near Bandra fort on Saturday while clicking selfies, was found floating in Mahim Creek today.

Nearly 48 hours after the mishap, locals spotted the body of Ramesh Rajaram Valunj at the edge of the water body in the morning and informed Dharavi police, a senior police official said.

The body was sent to Sion Hospital where it was identified after verification, he said.

Valunj, a resident of Jaffer Baba colony, a slum pocket behind Bandra fort, had jumped into sea to save Tarannum Ansari (18) and her two friends - Anjum Khan (19) and Kasuri Khan (19) - who all had slipped off a rock jutting in sea while clicking selfie on Saturday.

Though Valunj pulled Anjum and Kasuri out to the shores, he went missing after he re-entered into the water to save Tarannum, who remains untraced so far.

Fire brigade officials, professional divers, two rescue boats of Mumbai Police and a helicopter of Indian Coast Guard had carried out search operations till Saturday night but could not trace either Valunj or Tarannum, police had said.

The officer added that search for Tarannum is still on.

Dharavi police have made a diary entry as Walanju's body was found in their jurisdiction.

The body will be soon handed over to his family members for last rites.

Valunj, a natural swimmer, had reportedly saved a number of people from drowning from the same spot in the past.