The couple has spent over Rs 4 lakh of their personal savings in feeding hundreds of poor people in their neighbourhood during the lockdown and also waived three months fees of students studying in their school at Ambujwadi in suburban Malad. 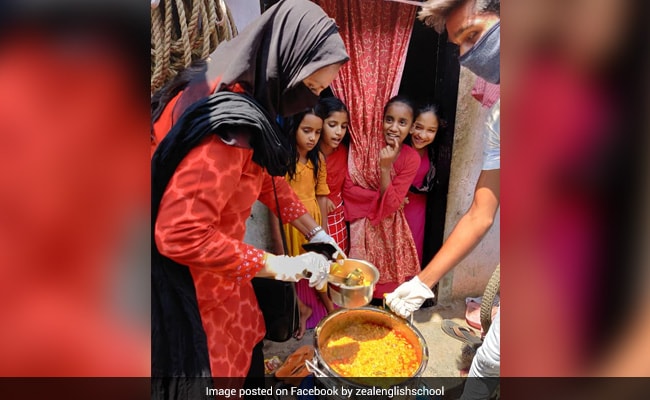 The couple has spent over Rs 4 lakh in feeding poor people in their neighbourhood.

A school principal and her husband have come to the rescue of not only their students, but also people in their neighbourhood hit hard by the coronavirus-induced lockdown, loosening their purse strings to
help those in crisis.

The couple has spent over Rs 4 lakh of their personal savings in feeding hundreds of poor people in their neighbourhood during the lockdown and also waived three months fees of students studying in their school at Ambujwadi in suburban Malad.

Mizga Shaikh, 38, the principal of non-aided Zeal English School at Ambujwadi, and her husband Faiyaz, 45, who is a trustee of the school, have provided food and ration to over 1,500 people during the lockdown period.

Faiyaz Shaikh, who works in a private cosmetic company, said they started helping people with food and ration in coordination with an NGO just 5-6 days after the lockdown was enforced in March-end due to the coronavirus outbreak. Four months on, they are continuing with theirhumanitarian work.

Initially, they received support from the NGO, which distributed khichdi to the poor people in the neighbourhood.

But, this wasn't enough for families hit hard by the lockdown and hence they decided to put in their own money to feed them, Faiyaz Shaikh said.

"Initially, the condition was very bad and many people would approach us for help, but with the easing of lockdown restrictions their number has gone down," he told PTI.

He said in the past four months, they have spent nearly Rs 4.5 lakh of their own savings on distribution of food and ration to people.

Faiyaz Shaikh had to dip into his wife's provident fund savings to carry on the charitable work. "When Mizga shared the idea of withdrawal of her provident fund, I told her to go ahead," he said.

He said currently they are living in a rented house with their two kids and had been saving for buying a home of their own.

However, after seeing the plight of people around them the couple decided to spend the money on a larger good.

According to the couple, who has been running the school for a decade, several family members, friends and acquaintances also helped in their mission.

The couple said have waived the fees for three months (April to June) when they learnt from students that their parents were not in a position to make payments to the school.