MMRDA Commissioner DVR Shrinivas, who earlier inspected the ongoing work and was briefed by the officials regarding the same, expressed hope that the project will be finished within the next couple of months. 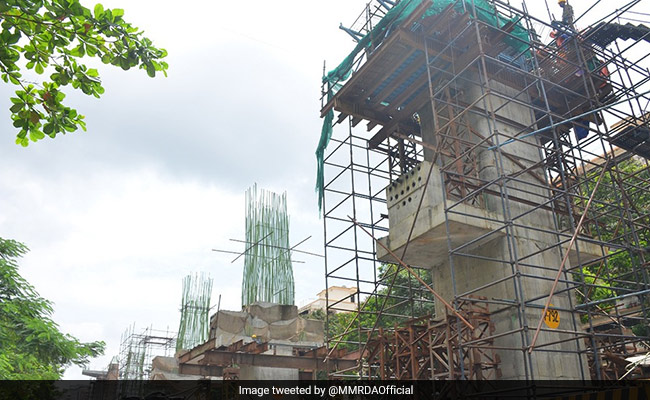 Mumbai Metro's red line 7 and yellow line 2A are likely be operational within the next three to four months, informed the Mumbai Metropolitan Region Development Authority (MMRDA) on Tuesday.

Speaking to ANI, MMRDA Commissioner SVR Shrinivas, who earlier inspected the ongoing work and was briefed by the officials regarding the same, expressed hope that the project will be finished within the next couple of months.

"I do not want to make any announcement regarding a deadline as we are already late by over two years. These lines were supposed to be functional in December 2019 but it got delayed for various reasons," he stated.

The work on Mumbai Metro's line 7 from Andheri East to Dahisar East (red line) and line 2A from Dahisar West to DN Nagar (yellow line) started in 2016 and the two lines were scheduled to be inaugurated in December 2019.

Speaking on the various reasons for the delay, Mr Shrinivas said that pandemic was not the only reason for the delay as the lockdown started in March 2020, much later than the inauguration was scheduled.

"There were several issues like availability of space for entry and exit points of the stations, encroachments of the worksites and some other reasons. We had to face some litigations also and rehabilitations of residents from encroachment sites was also very tedious and time-consuming," he stated.

The commissioner further revealed the 'catch up' plan being carried out by MMRDA to expedite the ongoing work.

"We have increased the number of our teams who are working in '24 by 7, 365 days' pattern now. Instead of sequential work where the project is done in a sequenced manner, one after the other, we have started parallel work for various phases of the ongoing project," Shrinivas stated.

"Apart from Mumbai, we are also working in Bengaluru. Some works are parallelly being done in Japan and Italy," he added.

Shrinivas also ensured the availability of metro coaches in time. "We have already received four trains and another will be delivered to us in a day or two. Seven more coaches will come to us in few days. So, we will have 12 trains in a month's time," he said.

4 Arrested For Stealing 167 Phones Worth Rs 33 Lakh In Mumbai: Police