Mumbai: Man asks waiters of restaurant for onions, gets a black eye 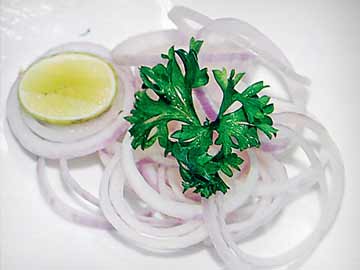 Mumbai: While politicians are gifting chief ministers onions as gag gifts,the common man is getting a black eye from the prized meal garnish. Recently, the management of Shalimar, a popular restaurant on Mohammed Ali Road, ganged up on a bunch of customers, after they demanded an extra plate of onions.

According to the Pydhonie police, the incident took place after 11 pm on Friday, when 23-year-old Mayur Pirati Jadhav, a resident of BIT chawl in Mazgaon, Byculla went to Shalimar restaurant to have dinner with six of his friends and relatives. They ordered some chicken starters and raan biryani.

Said Jadhav, "For the whole meal, we were served only one plate of onion, and since it was not enough for our group we requested the waiter to bring another. He said yes to us but never returned to our table. After a while, we reminded him again but he started talking about the increased prices of onion."

Jadhav continued, "We informed him that the prices had stabilised, but he got agitated and snapped at me, saying, 'Don't preach to me about onion prices'. Then another waiter joined the altercation and he was even more aggressive than this one; he caught me by my collar."

Soon, a scuffle broke out between the two groups. The waiters rushed to shut all the exits to the diner and asked the other customers to leave, which they were happy to do.

Jadhav, who works at Prince Aly Khan Hospital in Byculla, said, "They wanted to lock us all up and beat us good. One of the waiters threw an empty glass towards me which hit me near my eye and I started bleeding."

According to the police complaint, the livid waiters turned on Jadhav's relatives when they tried to intervene. But once the restaurant employees saw that Jadhav had started bleeding, they realised the fracas had spun out of control and decided to break it off by throwing Jadhav and company out of the diner. A battered Jadhav, accompanied by the others, went straight to Pydhonie police station and lodged an FIR.

The two were booked under sections 326 (voluntarily causing grievous hurt by dangerous weapons or means), 323 (voluntarily causing hurt), 504 (insult with intent to provoke breach of peace) and 34 (acts done by several persons in furtherance of a common intention) of the Indian Penal Code.

"We have registered a case and arrested the accused," said senior inspector Dinesh Ahire of Pydhonie police station. The police have the duo's custody till December 3.

Meanwhile, Jadhav received 12 stitches near his right eye. "My eye was saved by a hair's breadth. Had they hit me a little below, my eye would have been damaged," he said.

Doctors and sociologists who have been studying such rage-related crimes say that we are turning into an unstable mob because of a shaky economy and our individuated, high-speed lives. "Surging inflation, rising cost of living and bad relationships due to emotional disconnect in a fast life are factors that have created anger among people. Because of this, a small provocation can magnify into a full-blown brawl among people, specially on roads. Nobody is ready to listen to sense," said psychiatrist Harish Shetty.

Promoted
Listen to the latest songs, only on JioSaavn.com
The Other Side

MLA Abu Azmi, president of the state unit of the Samajwadi Party, who co-owns Shalimar along with his sister, said, "The restaurant's staff and proprietors are quality-conscious people and have put a lot of effort to make it this popular. I am sure the owners were not present when the incident took place. This episode will cast a bad light on the restaurant's image. I will see to it that such things don't happen in future."