Mumbai Rains: The authorities declared a holiday in the city and adjoining regions, asking people to avoid stepping out of their houses. 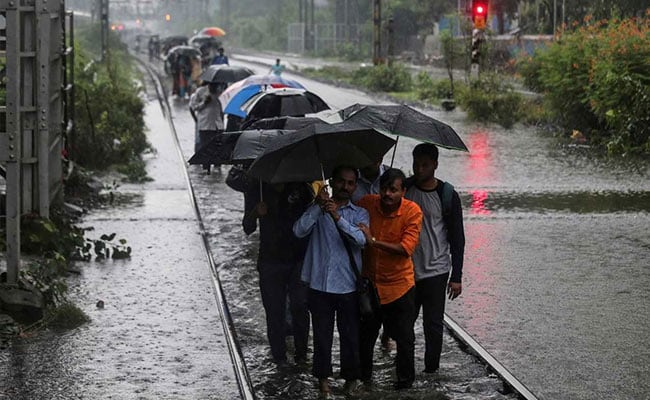 The monsoon has brought large parts of the state and its capital Mumbai to a standstill.

Six people were killed and 18 went missing after heavy rainfall led to a breach in the Tiware Dam in Maharashtra's Ratnagiri district. National Disaster Response Force (NDRF) teams are at the spot to carry out search and rescue operations.

As incessant rainfall lashed several parts of Maharashtra on Tuesday and nearly 30 people were killed across the state in separate rain-related incidents flooding the airport and paralysing local trains. 52 flights were  cancelled and 54 diverted because of bad weather and the skidding of a SpiceJet plane last night while landing in rain forced a shutdown of the main runway at the airport. "Our team is trying their best to bring the main runway back in operation and this may take upto 48 hrs," the Chhatrapati Shivaji Maharaj International Airport officials posted from its Twitter handle.

Here are the Highlights on the Mumbai rains:

Jul 03, 2019 14:38 (IST)
Aviation regulator DGCA has asked airlines that safety cannot be compromised at any cost and has asked them to ensure that pilots don't use an "unstabilised approach" while landing aircraft in bad weather. The advisory, titled "Monsoon Operations", comes after a SpiceJet plane overshot the runway during landing at the Mumbai airport amid heavy rain on Tuesday night and several similar recent incidents. "We have also instructed heads of flight safety of airlines to include in their safety briefings to pilots, an express instruction to refrain from landing with unstabilised approach while experiencing adverse weather conditions and initiate a go around," Director General of Civil Aviation Arun Kumar said.
Jul 03, 2019 12:55 (IST)
Union Civil Aviation Minister Hardeep Singh Puri: Mumbai Airport has not been shut. One of the runways which used to take 45 flights per hour, is now taking 36 flights. So, there has been some dislocation. It will be sorted out very quickly.
Jul 03, 2019 12:43 (IST)

Jul 03, 2019 11:59 (IST)
Mumbai airport shut its main runway late Monday night after a SpiceJet flight carrying 167 people overshot its landing and got stuck at the end of the strip. A secondary runway was pressed into service but over 200 flights have been delayed or diverted. The main runway is not likely to be operational before Thursday.  Two men died in an SUV after it was stuck in a flooded north Mumbai underpass last night. Local and long-distance train services were paralysed by waterlogged tracks and flooded stations, leading to long delays and cancellations.
Jul 03, 2019 11:12 (IST)

This year, almost like a monsoon miracle, one of the two lifelines of Mumbai, Western Railway , managed to stay afloat and chug along despite the city notching over 1,000 mm rainfall in the past 72 hours. @drmbct@RailMinIndia@PiyushGoyalOffc@PiyushGoyalhttps://t.co/N4FtO3aE17

6 bodies recovered till now after Tiware dam in Ratnagiri was breached. Rescue operations continue. 12 houses near the dam have been washed away. #Maharashtrapic.twitter.com/vkr71LBPCn

Jul 03, 2019 10:34 (IST)
India's financial capital limped back to normalcy Wednesday morning with public transport resuming services after torrential rains, that lashed the city since Sunday, subsided. At 375.2 mm, the rainfall in the 24-hour period before 8.30 am Tuesday was the highest since the July 26, 2005, deluge in Mumbai.  It had widely affected train and bus services while several flights had to be diverted from Mumbai airport and others were delayed for hours.
Jul 03, 2019 09:53 (IST)
READ | 6 Dead, 18 Missing After Dam Breach Floods Villages In Maharashtra's Ratnagiri
Six people were killed and 18 are still missing after heavy rainfall led to a breach in the Tiware Dam in Maharashtra's Ratnagiri district at around 9.30 pm last night. Seven down-stream villages have been flooded and at least 12 houses near the dam have been washed away. A National Disaster Response Force (NDRF) team is at the spot, which is approximately 275 kilometres from Mumbai, to carry out search and rescue operations. Additional rescue teams consisting of government officials, police and volunteers are also working at the site. 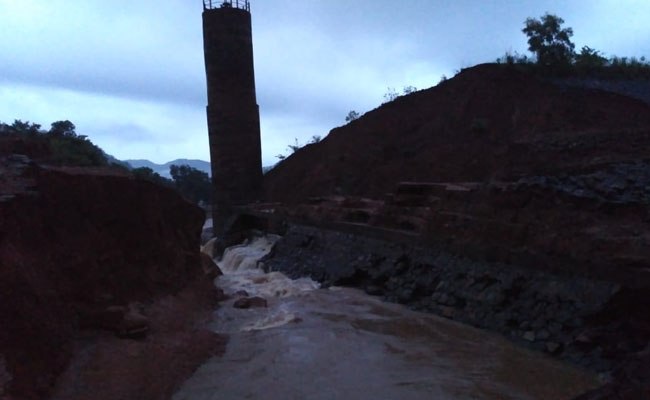 Jul 03, 2019 09:28 (IST)
Many buses operated by Brihanmumbai Electricity Supply and Transport (BEST) broke down while some were diverted when rains pummelled Mumbai Monday. As rains took a break on Tuesday, bus services ran smoothly throughout the day. "Transportation engineering staff and officers attended these stranded buses round-the-clock on Monday and Tuesday. As many as 74 buses got stuck due to water-logging.
Jul 03, 2019 08:54 (IST)

#UPDATE: 23 persons have lost their lives after a wall collapsed on hutments in Pimpripada area of Malad East due to heavy rainfall, yesterday. #Maharashtra (File pic) pic.twitter.com/GQHQi1xEO6

Jul 03, 2019 08:41 (IST)
More than 20 people were killed early yesterday morning after the rains led to the collapse of a wall in Mumbai's Malad East. Rescue teams led by the NDRF and Mumbai Fire Brigade mounted a desperate all-night effort to save three people trapped in debris. One of those trapped was a young girl - 12-year-old Sanchita - whose body was recovered after an unsuccessful 14-hour rescue attempt.
Jul 03, 2019 08:40 (IST)
Two people were killed and more than 20 are still missing after heavy rainfall led to a breach in the Tiware Dam in Maharashtra's Ratnagiri district at around 9.30 pm last night. Seven down-stream villages have been flooded and at least 12 houses near the dam have been washed away. National Disaster Response Force (NDRF) teams are at the spot, which is approximately 275 kilometres from Mumbai, to carry out search and rescue operations. Additional rescue teams consisting of government officials, police and volunteers are also working at the site.
Jul 03, 2019 08:18 (IST)
Mumbai Western Railway Suburban Services
The Western Railway issued a statement saying that its suburban services, including the AC trains which were stopped yesterday, will be running without any disruption.

WR suburban services are running without disruption. AC local will run today as per its schedule. #WRUpdates#mumbaimonsoon@drmbct

Jul 03, 2019 07:54 (IST)
Maharashtra: Bodies of 2 persons have been recovered by civil administration after Tiware dam in Ratnagiri was breached. About 22-24 people are missing. 12 houses near the dam have been washed away. Civil administration, police and volunteers are present at the spot.
Jul 03, 2019 07:50 (IST)
A 14-hour-long effort to rescue a 12-year-old girl, trapped under debris after heavy rain led to the collapse of a wall in Mumbai's Malad area, ended in tragedy as the rescue team pulled out her body on Tuesday evening. A massive rescue effort to save the girl, identified as Sanchita, began this morning after her cry for help was heard from under the debris. The girl could be heard calling out for water to drink.
Jul 03, 2019 07:43 (IST)
Twenty one people were killed as heavy rain pounded Mumbai and its surrounding areas overnight, flooding the airport and paralysing local trains, the lifeline of India's commercial capital. The city received the heaviest rain over a 24-hour period since the 2005 deluge. The weather office has sounded a red alert for Mumbai today, warning of more rain.