Kamala Mills Fire: It took more than three hours for fire-fighters to douse the huge flames that leapt up in central Mumbai's nightlife hub.

The fire seems to have started at a restaurant in Kamala Mills Compound, Lower Parel.

Mumbai: A massive fire broke out at a building in Kamala Mills Compound in the Lower Parel area of Mumbai. So far, 14 people have been reported dead and several others injured. Majority of those killed are women, according to civic authorities. The fire appears to have started at a restaurant at the top floor of the building, although the cause of the fire is yet to be ascertained. Those injured were rushed to King Edward Memorial Hospital and Scion Hospital. Fire-fighters took more than three hours to douse the huge flames that leapt up in central Mumbai's nightlife hub. The fire brigade found that illegal constructions exacerbated the fire, which finally brought the restaurants down.The building in Mumbai houses commercial establishments including news channels have had to stop broadcasting.

Here are the highlights of the fire at Mumbai's Kamala Mills Complex: 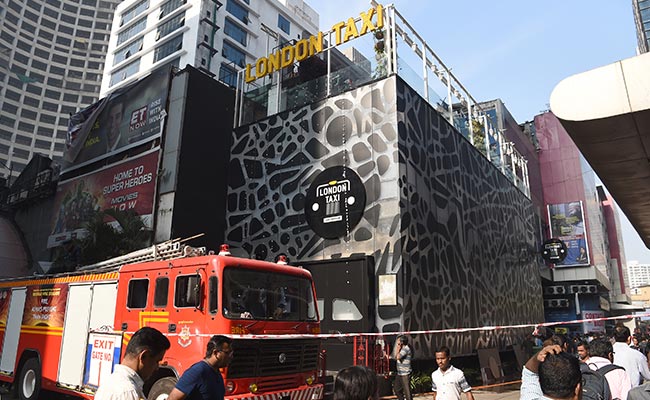 Dec 29, 2017 14:42 (IST)
FIR registered against for not keeping any fire safety equipment, blocking safety exits and not helping those trapped in fire.
Dec 29, 2017 14:02 (IST)
Video of 28-year-old woman celebrating her birthday at a roof-top pub in Kamala Mills before she died.

Dec 29, 2017 13:56 (IST)
Commenting on the fire at Kamala Mills compound, Kirit Somaiaya, a BJP lawmaker, alleged that the fire department had given clearance illegally to the pubs and restaurants despite violations.
"For me it is because the fire department is giving illegal NOCs (No Objection Certificates) to simultaneously the health department of BMC who are giving permissions to such restaurants,"Mr Somaiaya said. 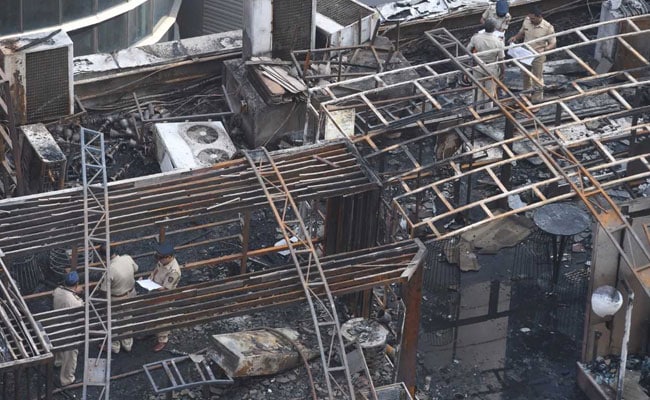 Dec 29, 2017 13:25 (IST)
Mumbai's civic body had been warned just months ago about deadly violations in the four-storey building at Kamala Mills where the fire at a rooftop restaurant left 14 dead. The politician who claims to have complained to the agency about the Trade House building says he was told that there was "nothing illegal".
Dec 29, 2017 13:19 (IST)
Investigation on the fire in Mumbai's Kamala Mills complex: S Jay Kumar, a senior Mumbai police officer said he could not speak on the cause of fire. "We have started our investigation... It is only after investigation that we will be able to say anything," he said.
Dec 29, 2017 13:10 (IST)
The fire at a rooftop pub in Kamala Mills compound intensified by a false ceiling made of inflammable material. The fire engulfed the rooftop within minutes, with hardly any escape route for the revelers.
Among the major violations in fire safety rules that have emerged so far is the absence of fire extinguishers in the restaurant. There were no emergency exits as well. 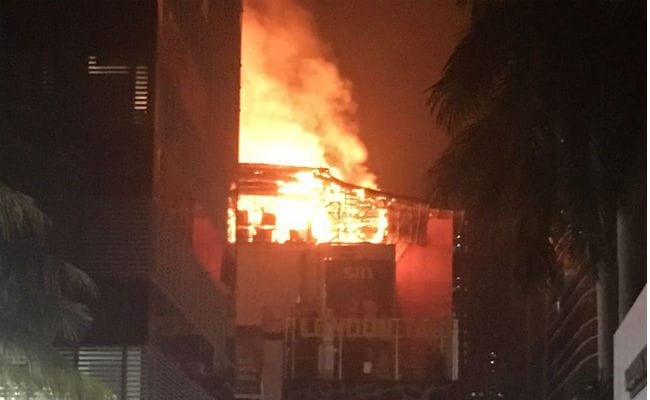 Dec 29, 2017 13:01 (IST)
Mojo Bistro in Kamala Mills was the building next to 1 Above that was caught in the fire. The bistro posted their official statement on the fire, "We are extremely saddened by the incident. Mojo's has all its fire safety norms, certificates, and procedures in place. The staff are thoroughly trained in fire drills hence our staff was able to evacuate all our guests and themselves out to safety with zero injuries. There were NO cylinders on our premises. We are fully complying with the authorities to help in any way we can.
Our prayers and deepest condolences to the families who lost their loved ones in this gruesome incident." 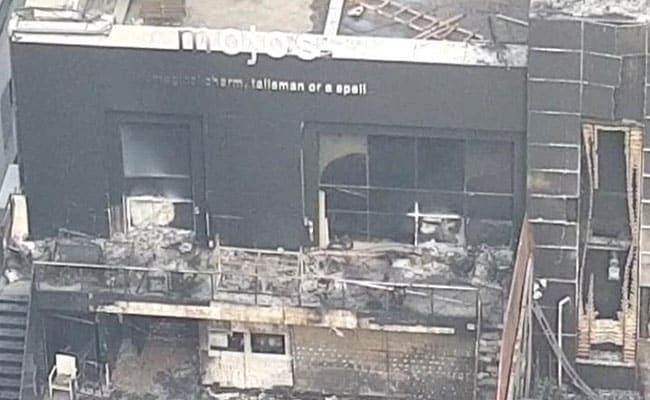 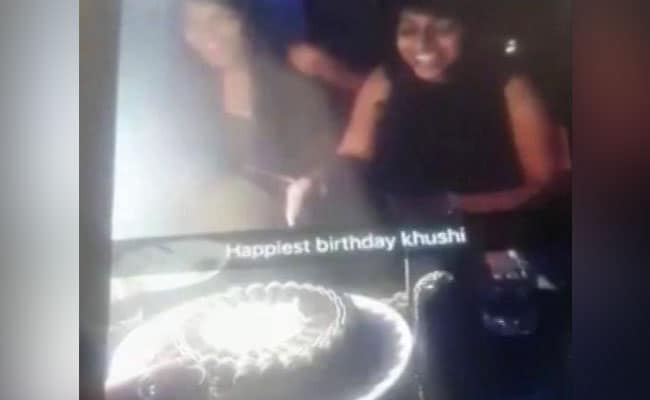 Dec 29, 2017 11:42 (IST)
"Our deepest condolences go out to the families who lost their loved ones in the tragic fire incident at Kamala Mills. We wish a speedy and complete recovery to those injured. Congress workers in the area are urged to put their best foot forward to support the rescue operation," the official Twitter account of the Congress' Maharashtra wing posted.
Dec 29, 2017 11:39 (IST)
The 28-year-old who died in the fire on her birthday was identified as Khushboo Mehta. Her grandfather said, "My granddaughter has died. It was her birthday today. No one bothered to check...this restaurant had no fire extinguisher, no equipment to put out fires, no proper outlets. The civic bodies and police did nothing."
Dec 29, 2017 11:37 (IST) 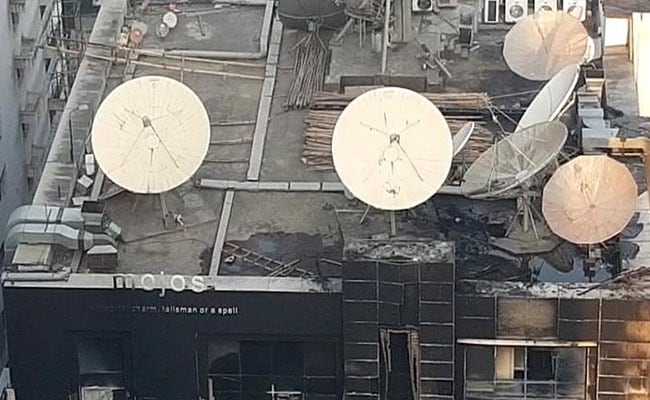 "There was no time for anyone to reach out because the fire spread so rapidly. The staff members of the restaurant were trying to help the customers as much as possible," says the eyewitness and survivor, Dr Sulbha Arora
Dec 29, 2017 11:23 (IST)
Police officials said, "The fire brigade rescued at least 35 injured persons, who were trapped inside the hotel. They were shifted to a hospital".
Dec 29, 2017 11:15 (IST)
"BMC Commissioner has visited #KamlaMills in the midnight itself and has taken stock of the situation. Asked him to take strong action against erring officials immediately," Chief Minister Fadnavis said.
Dec 29, 2017 10:36 (IST)

Dec 29, 2017 10:31 (IST)
"Disturbing to know about the loss of lives in unfortunate #KamalaMills fire incident in Mumbai. My thoughts are with the families who lost their loved ones and prayers for the speedy recovery of the injured. Directed the BMC Commissioner to conduct an in-depth enquiry," Maharashtra Chief Minister Devendra Fadnavis posted on Twitter.
Dec 29, 2017 10:29 (IST)
Several news channels also operate from the compound and had to shut down broadcast, reportedly due to damage to their equipment.
Dec 29, 2017 10:29 (IST)
A woman celebrating her birthday and her friends were among the 14 who died in the fire that started from a rooftop restaurant in Mumbai's Kamala Mills complex late last night. The 28-year-old woman's body was identified by her boyfriend, the police said.
Dec 29, 2017 09:48 (IST)
Prime Minister Narendtra Modi tweeted, "Anguished by the fire in Mumbai. My thoughts are with the bereaved families in this hour of grief. I pray that those injured recover quickly: PM @narendramodi"
Dec 29, 2017 08:54 (IST)
President Ramnath Kovind tweeted his condolences for those affected by the Mumbai fire.

Disturbing news about the fire in Mumbai. Condolences to the bereaved families and wishing the injured an early recovery. Commend the valiant efforts of fire-fighters and those in rescue ops #PresidentKovind

Dec 29, 2017 07:53 (IST)
The majority of those killed were women attending a birthday party at a rooftop restaurant, police said. The 28-year-old woman celebrating her birthday was among those who died, her grandfather told news agency Reuters.
Dec 29, 2017 07:50 (IST)

I spoke to Hon'ble Municipal Commissioner Mehta sir, MLA Sunil Shinde ji and Leader of the House Yashwant Jadhav ji, who were at the place assisting relief ops. Implementing fire audits of such places are a must, and action will be taken if violations are found.

The #KamalaMills fire started at 1 Above. I was there and barely made it out alive. Some were not so lucky. Praying for the injured and the deceased. It was the scariest thing I have ever survived!

Dec 29, 2017 06:42 (IST)
Mumbai-based gynaecologist Dr Sulbha KG Arora says there was a stampede as people rushed towards the main exit, adding that no one knew where the fire exits were. Soon after the fire started, the whole place was engulfed in flames, she tweeted.
Dec 29, 2017 06:16 (IST)
Casualties details from KEM hospital; 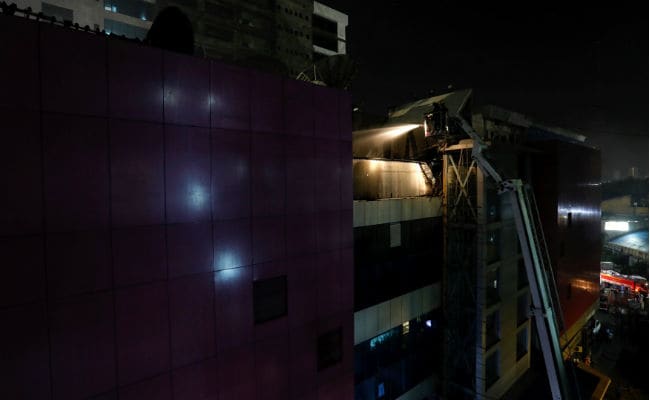 Fire Breaks Out In Mumbai Building, 14 Dead, Several Injured
At least 14 people died and nearly a dozen were injured in major fire at Mumbai's Kamala Mills compound that houses several offices and restaurants."
Dec 29, 2017 04:24 (IST)
Several news channels that operate from the Kamala Mills compound have had to shut down their broadcast. 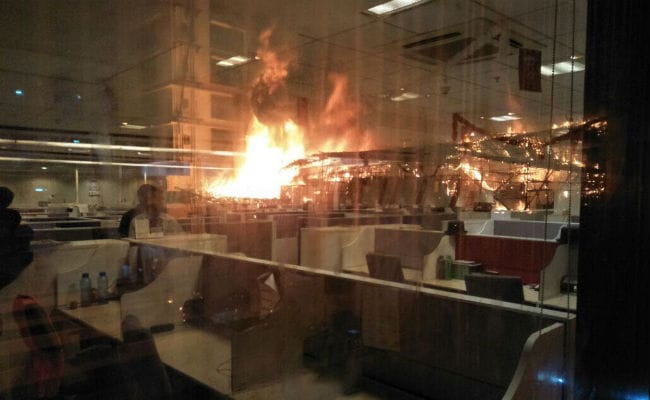