The court, which warned Kangana Ranaut that failure to appear today would lead to a warrant being issued, marked her attendance and postponed the case to November 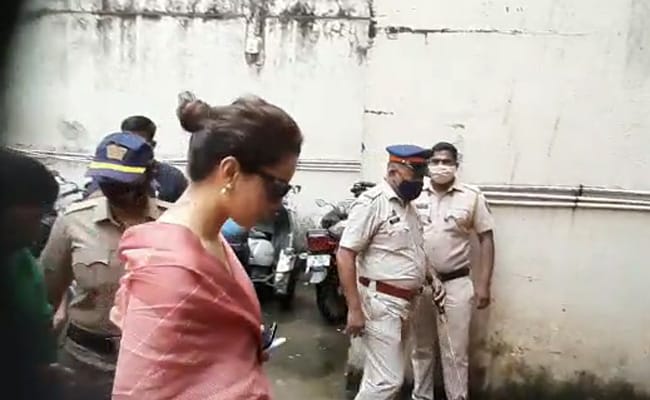 Actor Kangana Ranaut has filed a counter-complaint against lyricist Javed Akhtar in a Mumbai court, alleging "extortion and criminal intimidation". She has accused Mr Akhtar of threatening her and also said she had "lost faith" in the Metropolitan Magistrate's court in Andheri.

Ms Ranaut's lawyer informed the court of a request to transfer the case.

Ms Ranaut's counter-complaint is in response to a defamation suit by Mr Akhtar, who has alleged she dragged his name into a TV discussion last year on the death of actor Sushant Singh Rajput.

During the filing of the counter-complaint, Ms Ranaut's lawyer, Rizwan Siddique, accused Mr Akhtar of making threats, although, by his own admission, these alleged threats are an old matter

"Kangana and Rangoli were called to Javed Akhtar's home... Javed Akhtar had no locus in their matter but he called then and threatened them... this is not today but this has been reported for three or four years and Kangana said it many times - that she was scared and her modesty was outraged," he said

"Kangana did not file a complaint thinking of his age... (but) because he is now aggressively moving forward in this matter, Kangana got permission from her family to file her complaint," the lawyer added.

"Now she has recorded this in her complaint... when Javed Akhtar says he had nothing to do with this matter (the subject of the alleged defamation), why did he call Kangana?" he asked in court.

Mr Siddique also said his client did not trust the judge - metropolitan magistrate RR Khan, who last week warned Ms Ranaut that failure to appear for today's hearing could lead to a warrant.

Ms Ranaut had been called last week but stayed away citing "COVID-19 symptoms". Today was her first appearance, according to PTI, since the February summons.

"Kangana's health is still not completely fine... but still I told (her) that you come to the court so that it does not feel that we are not coming. Why is the judge repeatedly calling Kangana to the court? Threat to issue warrant was given twice..." Mr Siddique declared.

"When her lawyer (referring to himself) is present for every hearing... and Kangana also appeared before the court once before... what is the need to still call her?" he added.

The actor wants the judge in this case to be changed, he declared.

At the previous hearing on September 14 - when Ms Ranaut had sought exemption - Mr Akhtar's lawyer declared her request an "orchestrated tactic to delay the case proceedings".

Earlier her request to cancel the defamation suit was rejected by the Bombay High Court.

Rizwan Siddique argued the Metropolitan Magistrate had "mechanically ordered the enquiry" against his client "without assigning (any) reasons".

Javed Akhtar's lawyer, Jay Bharadwaj, sought dismissal of the plea, saying that "the magistrate had applied his mind to direct an inquiry after examining Mr Akhtar's complaint".

After hearing both sides Justice Revati Mohite-Dere said she found no procedural illegalities or irregularities in the magistrate court's order initiating the proceedings.