I Was Only Urinating, Says Mumbai Youth Accused of Flashing Foreigner 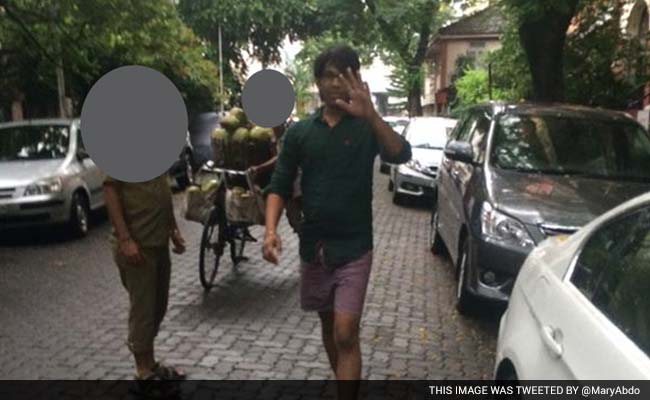 The woman posted this picture of the accused on Twitter, sparking an outrage and catching the attention of the CM, who pushed the cops to find and arrest him in two days.

Mumbai: After an American woman tweeted about a youth who allegedly masturbated at her in broad daylight near Colaba causeway, the accused has come forward with his own version of events "I was urinating there. When I finished, the foreign woman came from behind and saw me zip up my shorts. Our eyes met and suddenly she started screaming," said the 25-year-old, who was arrested in the wee hours of Wednesday, after which he was granted bail.

He added that the whole incident was a misunderstanding and he had been defamed and falsely implicated. mid-day had highlighted the episode that took place on Monday morning, after which the woman tweeted a picture of the youth along with the allegation. She tweeted, "Please RT-this man just masturbated at me on the street in broad daylight.

Ran away after a confrontation." The post sent Twitter into overdrive and even caught the attention of the Chief Minister, who intervened and ensured that the very next day, the Colaba police registered an FIR in the matter under section 509 (Word, gesture or act intended to insult the modesty of a woman) of the IPC.

With intense pressure to perform, the cops circulated the image of the youth on WhatsApp until they discovered his identity Gopal Valmiki, a resident of Colaba. Two days later, the police arrested Valmiki and presented him in court, when he was granted bail.

Valmiki's family maintains that he is innocent. "We are a family of seven, and half are females. Our brother could not have done this. He is an educated man and works in the share market. He even got married a few months ago," his siblings told mid-day.

As Valmiki tells the tale, he had gone on a morning walk and needed to attend to nature's call. There was no public toilet there, so he was forced to relieve himself between two parked cars. It was as he was zipping up that the woman spotted him and began to scream.

His brother added, "Two passers-by caught my brother as the woman began screaming. They decided to take my brother to the police station. On the way there, my brother explained to the woman that it was a clear case of misunderstanding. My brother never tried to escape. The woman let him off near Electric House in Colaba."

His sister, in turn, said it was unfair of the woman to publicly malign Valmiki, instead of filing a police complaint against him. Claiming the family was unaware of the incident until much later, she added, "The woman let off my brother and later posted a picture of him on Twitter.

"We have been staying in Colaba since childhood, and foreigners regularly visit this area, but my brother has never been involved in any such act in the past. People are calling it perverted and shameful. I want to tell everyone that my brother is innocent," she added.

After the public outrage and the CM's intervention in the matter, there was huge pressure on cops to arrest the accused. A police source said, "As we had no clue about the accused, we made a special WhatsApp group, connecting informers from residential associations and committees. We kept adding more and more people to the 'Eyes and Ears' group and sent everyone the accused's photo until someone identified him."

3 Nigerians Arrested With Drugs Worth Rs 3.18 Crores In Mumbai: Police