Four arrested after 13-year-old allegedly drugged, gang-raped at her friend's place in Mumbai 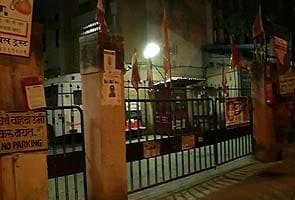 (The gate of the hospital where the girl is recovering)

Mumbai: A 13-year-old girl was allegedly drugged and gang-raped by four men at the residence of her friend, also a minor girl, who lives in the same locality in Vakola in western Mumbai.

The girl in her complaint said on Thursday evening one of her girlfriends invited her to her house, where four men, all known to her, were already present. The teen says she was given a drink, spiked with sedatives and as she fell unconscious, the men raped her.

The boys were arrested today, but her friend has not been apprehended as yet.

Promoted
Listen to the latest songs, only on JioSaavn.com
The girl is at a local government hospital and is stable. A medical test has been conducted and report is awaited.

The incident comes three weeks after the horrific rape of a 5-year-old child in Delhi. Another minor is battling for her life in a Nagpur hospital after she was brutally raped, allegedly by a 35-year-old man.