Maharashtra Leader of Opposition Devendra Fadnavis took a swipe at the Uddhav Thackeray-led coalition government over the delay in completion of Mumbai Metro's line 3 because of the stuck car shed project. 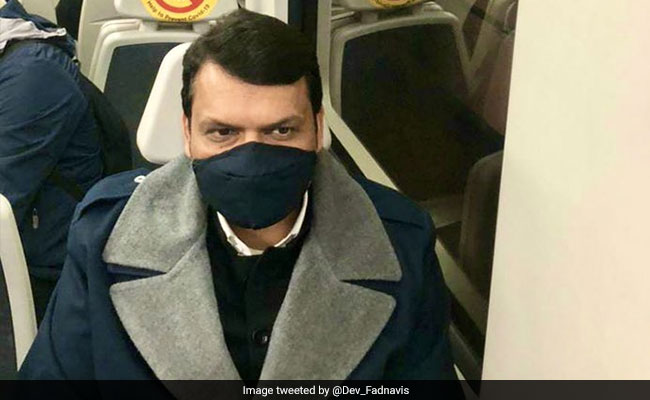 Maharashtra Leader of Opposition Devendra Fadnavis took a swipe at the Uddhav Thackeray-led coalition government (MVA) over the delay in development of a Metro car shed in Mumbai - a subject the former allies have often sparred over since parting ways in 2019.

The remark came a week after he wrote to Mr Thackeray making his case for the car shed for Metro line-3 to be shifted back to its original but environmentally-sensitive site in Mumbai's Aarey Colony.

"I travelled in Delhi Metro today to go back to the airport and reached in a very short span (of time) as compared to travel by road! (I) don't know when I will be able to travel in Mumbai Metro 3 to the airport, looking at the things messed up by MVA on Car Shed issues," he tweeted.

I travelled in Delhi Metro today to return back to the airport & reached in a very short span as compared to travel by road!
Don't know when will I be able to travel in Mumbai Metro 3 to the airport, looking at the things messed up by MVA on CarShed issues ????#Metro#Mumbaipic.twitter.com/JKPTElbcdD

Over the past few weeks, the former chief minister has often raked up the issue of delay in the car shed project, for which his government had allotted land in Aarey Colony and cut thousands of trees in 2019 despite the matter being in court and backlash from the civil society.

The Mumbai Metro car shed project is now in a limbo.

In December last year, the Bombay High Court paused the Uddhav Thackeray government's plan to shift it from Aarey Colony to Kanjurmarg. In its interim order, the court stayed the land transfer citing multiple claims.

Soon after, Mr Fadnavis said the government's "ego" was delaying the project and sought its transfer back to Aarey Colony. The suggestion invited a brisk brush-off from the Chief Minister.

"Yes, I am arrogant for Mumbai. We sent the car shed to Kanjurmarg because building it in Aarey Colony was destroying the forest there. First, trees would have been cut for a car shed... then for something else... and slowly the whole forest would have disappeared," Mr Thackeray said, adding that infrastructure works undertaken in haste can lead to waste and not true development.

The state government then formed a nine-member committee to suggest alternatives, which Mr Fadvanis attacked in a letter to the Chief Minister.

He said the MVA coalition government was being misled by some bureaucrats, and that shifting the project away from Aarey Colony would only add to the cost and cause more environmental damage.