"Uddhav Thackeray-led MVA government had made it an ego issue to shift the car shed. It (constructing the car shed on Kanjur land) is economically non-viable," Mr Fadnavis said. 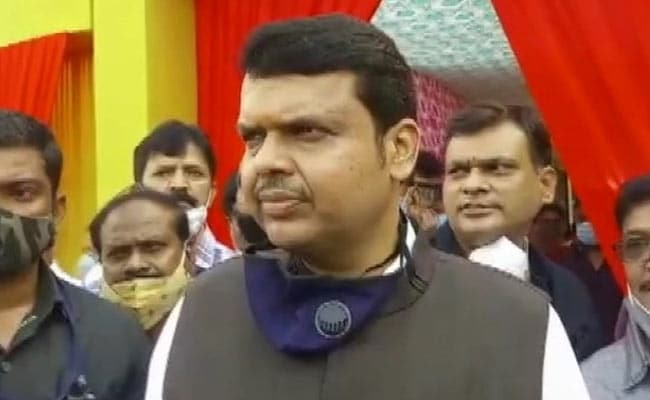 With the Bombay High Court on Wednesday putting on hold the allotment of salt pan land in Mumbai's Kanjurmarg area for the construction of an integrated Metro car shed, senior BJP leader Devendra Fadnavis has asked the Shiv Sena-led state government to give up its "ego" and resume the construction on the Aarey Colony land.

Speaking to reporters, the Leader of Opposition in the Legislative Assembly said, the Uddhav Thackeray government had shifted the car shed from the Aarey Colony to Kanjurmarg "only to satisfy its ego".

"Uddhav Thackeray-led MVA government had made it an ego issue to shift the car shed. It (constructing the car shed on Kanjur land) is economically non-viable," he said.

"Even the Manoj Saunik Committee had made similar observations that the state could incur an additional burden of Rs 5,000 crore if the metro car shed is shifted to Kanjurmarg," said the former Chief Minister under whose watch the project had taken off at Aarey Colony.

A division bench of Chief Justice Dipankar Datta and Justice GS Kulkarni has stayed an order passed by Mumbai suburban district collector allotting 102 acre of salt pan land in Kanjurmarg area for the construction of an integrated Metro car shed.

The bench also restrained the authorities from carrying out any construction work at the said land.

The Centre and the Shiv Sena-led MVA government in Maharashtra are locked in a tussle over ownership of the land earmarked by the state for constructing the car depot which was earlier planned at Aarey Colony, a green belt in suburban Goregaon.

The Union government had filed a petition in the high court challenging the October 1, 2020 order passed by the collector allotting the land for construction of the car shed, and said the land belongs to its (Centre's) salt department.

Mr Fadnavis said he didn't understand why Chief Minister Uddhav Thackeray was "ignoring observations" of a committee set up by his own government.

"Even the Supreme Court had permitted the use of Aarey Colony land for (constructing) Metro car shed and accepted report of the then government," he said.

Devendra Fadnavis said the total "carbon sequestration of trees in their lifetime would be achieved within 80 days of operations of Metro", which, was mentioned in the report accepted by the SC.

Stating that residents of Mumbai will be deprived of Metro services for the coming years due to relocation of the project, Mr Fadnavis said, "I request this government to give up its ego and construct the metro car shed at Aarey land. The High Court's decision is a slap on the face of the Thackeray government".

Metro services could have commenced in 2021, but now they will be delayed to 2024, he said.

Mr Fadnavis further claimed that some officials of the state government might have "incorrectly briefed" Chief Minister Uddhav Thackeray sensing that he had made it an "ego issue" to relocate the project.

Mr Fadnavis said the state cannot go ahead with its decision without the Centre's consent as the union urban development secretary is also part of the MMRCL (Mumbai Metro Rail Corporation), which is constructing metro lines in Mumbai.

"Moreover, the metro is funded by JICA (Japan International Cooperation Agency). The secretary had written a letter to the state government noting objections over relocation of the metro car shed site to Kanjurmarg. The Centre had given a 50 per cent funding in this project," he said.

Mr Fadnavis said if the JICA objects to it (relocation of the project site), the funding of Rs 18,000 crore coming from Japan may not be received, "which will put the future of the project in dark".

Mr Fadnavis said the state government had spent Rs 100 crore on the metro car shed project when its construction was underway in the Aarey Colony.

"The rafts created for the car shed are still lying on the Aarey land, which means the state might allow some construction work there. (If that is the case) then why not allow the entire car shed to come up there itself? Why to insist on relocating it to Kanjurmarg?" he asked.

Devendra Fadnavis said the BJP will not criticise the state government if it reverses its decision on relocating the project.

Mumbai Man Arrested For Beating His Neighbour To Death