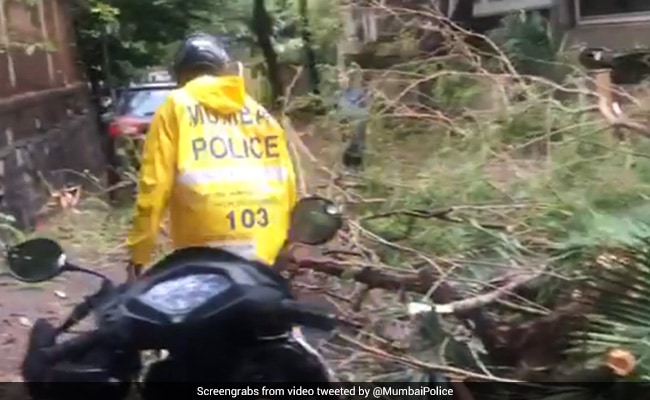 The policemen carried out the road clearing till help arrived, Mumbai police said.

Cyclone Nisarga may have spared Mumbai, which is already reeling under the COVID-19 pandemic, after it made landfall near adjoining Alibaug on Wednesday but it did leave its presence known in some parts of the city.

Mumbai police tweeted a video of a police official, possibly on way to work, clearing the tree banches from a road, to ensure commuters do not face problem. The policemen carried out the road clearing till help arrived, it said. The policeman was wearing a helmet suggesting that he had only stopped by to clear the road.

Strong winds gushing through Mumbai due to #CycloneNisarga ended up uprooting this tree, blocking the lane at Mount Mary. Our friend in Khaki saw it & started clearing the branches till help arrived.

The cyclone -- the first to  hit Mumbai in 72 years -- hit the Maharashtra coast with wind speeds of up to 120 kmph, making landfall at 12.30 PM at Alibaug near Mumbai.

Ahead of Nisarga's landfall, the state government authorities had asked people in vulnerable areas to shift to safer places.

Flight operations at the Mumbai airport, suspended at 2.30 pm, resumed in the evening, a spokesperson of GVK said.

Maharashtra and Gujarat had activated their disaster response mechanism, deploying NDRF teams and evacuating people from areas in the cyclone's path.

Cyclone Nisarga is now a depression over west Vidarbha region and will weaken further, the India Meteorological Department (IMD) predicted on Thursday.