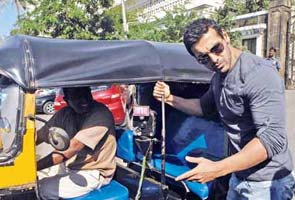 Mumbai: It doesn't matter whether you are a star or a commoner; one cannot escape refusals from the city's autorickshaw drivers. And their latest victim was Bollywood actor John Abraham. He was refused a fare from his residence at Bandstand to Taj Lands End.

Thanking MiD DAY and Mumbai Traffic Police, John Abraham, who was the face of MiD DAY's Meter Down campaign since its inception on October 12, 2011, said, "Being brought up in a middle-class family, I have commuted via rickshaws, buses and trains. So I know the kind of problems commuters face when autos refuse to ply," said John.

He further stated that on several occasions when his mother -- who has difficulty in walking due to a knee ailment -- is refused by an auto to go to the nearby market he has to use his celebrity status to get the job done. Meanwhile, the traffic officials deployed at Bandstand, urged people to come forward and complain against those errant auto and taxi drivers who refuse fares.

Promoted
Listen to the latest songs, only on JioSaavn.com
Commenting on the refusals faced by commuters, Additional Commissioner of Police (Traffic) Brijesh Singh, said, "If a meter is kept on hire, then the commuters must directly board the vehicle. If the commuters follow this and stop asking the drivers before boarding their auto or taxi, the problem of refusal will not arise."