After Facebook video, student committed suicide by jumping from 19th floor of Taj hotel in Mumbai

Mumbai: 24-year-old Arjun Bhardwaj, an engineering student, checked into a suite on the 19th floor of hotel Taj Lands End in Mumbai before daybreak on Monday. Hours later, he broke a window and jumped. Security guards who heard a loud "thud" rushed and found his body.

Before jumping around 6.20 pm, Arjun Bhardwaj, whose family is in Bengaluru, posted a macabre "suicide tutorial" on Facebook. "Step 1, write notes to people...step 2, get drunk, Step 3...enjoy the view, Step 4...have bacon pasta," he says in the short video. He is in a bathrobe, smoking and drinking from a bottle of wine. "See you guys on the other side," is the last thing he says before the video ends.

He reportedly used a chair to break the double-pane window.

The police say in one of the notes found scattered around the suite, he said "sorry" to his parents. He also wrote: "I'm a drug addict...I don't want to live anymore and hence committing suicide." He had allegedly been depressed for some time and had come prepared. 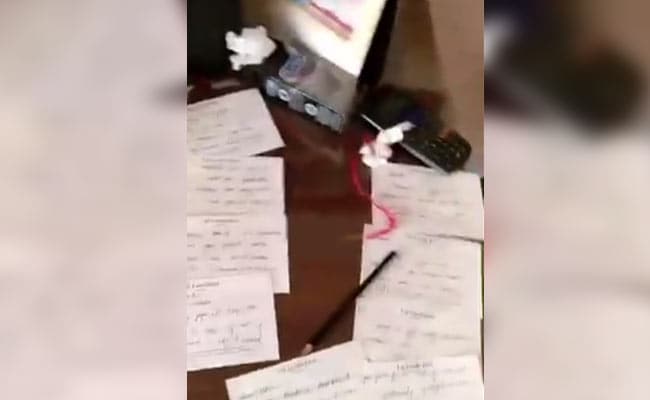 Before jumping, Arjun Bhardwaj, whose family is in Bengaluru, posted a macabre "suicide tutorial" on Facebook

The student had submitted proper documents before checking in around 3 am on Monday morning, which helped the officials identify him.

According to the police, his body was retrieved after a one-hour struggle as he had fallen on an 11th floor terrace of the hotel, which has 25 floors. Workers had to crawl through a ventilator shaft to get to him.

The body has been sent for a post-mortem.

Mr Bhadwaj's father, a businessman, had reportedly been worried about his son, according to the police. He had met him a few days ago.

Promoted
Listen to the latest songs, only on JioSaavn.com
The Mumbai police tweeted: "Deeply bereaved with suicide of a young boy in the city. We urge the youngsters to reach out to us #WeAreListening."

A spokesperson of Taj said: "We will extend our full cooperation to all the investigating authorities concerned. Our heartfelt condolences are with the family of the bereaved."