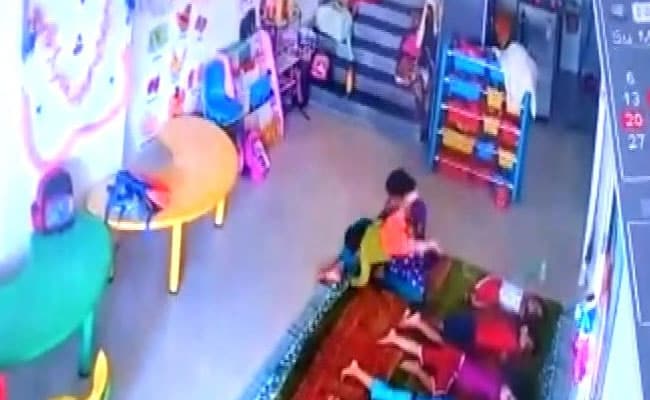 The parents of a 10-month-old baby complained their child was beaten up at creche in Navi Mumbai.

Mumbai: In a shocking incident, a 10-month-old girl was allegedly beaten up and kicked at a creche in Navi Mumbai's Kharghar by a caretaker, who along with the day care centre owner has been arrested, police said today.

Taking cognisance of the matter after a video of the incident went viral, Maharashtra's Women and Child Development Minister Pankaja Munde said they have decided on compulsory installation of CCTVs at such centres.

The incident came to light when the CCTV footage of Purva Play School and Creche, a day care centre for children at Kharghar in Navi Mumbai, was analysed by the police and the infant's parents.

Content in this video could be disturbing for viewers.​

The 10-month-old girl's parents Ruchita and Rajat Sinha, who are complainants in the case, used to leave their child at the day care centre as they both are working.

On Tuesday, when they went to take her, they found a wound on their daughter's forehead.

Ruchita asked creche owner Nikam about it, but she did not get a proper response from the day care centre. When the baby's parents approached a doctor, he suspected it to be a case of child abuse.

Subsequently, the child's parents went to Kharghar Police Station and lodged a complaint.

The police and the child's parents were shocked when they later saw the CCTV footage of creche which showed Sheikh beating and slapping children who were left by their parents at the day care centre.

The CCTV footage also showed Sheikh beating Ruchita's daughter while some other infants were sleeping, police said. In the video, Sheikh is seen hitting, throwing and kicking the child.

Police registered an offence against Sheikh and Nikam under section 325 (voluntarily causing grievous hurt) of IPC and section 23 of Juvenile Justice (Care and Protection of Children) Act-2000, police official said.

The child is being treated at a private hospital for the injuries inflicted on her.

Promoted
Listen to the latest songs, only on JioSaavn.com
The video of the alleged incident has gone viral on social media, prompting the authorities to announce installation of CCTVs at such centres.

Minister Pankaja Munde termed the incident as shocking. "We have decided to make it compulsory to install CCTVs at play schools, to avoid recurrence of such incidents," she said.