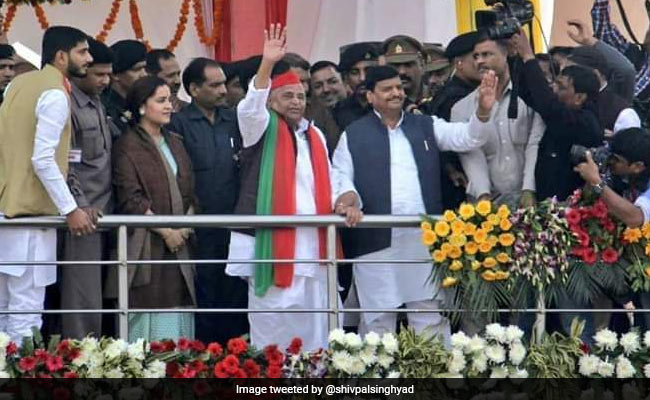 Shivpal Singh Yadav, chief of Pragatisheel Samajwadi Party (Lohia), addressed a "Jan Aakrosh Rally" in Lucknow -- the first such event by the party after its formation this October -- which was attended by Samajwadi Party (SP) founder Mulayam Singh Yadav.

Even as Mr Shivpal said the Bharatiya Janata Party (BJP) has "weakened" the country and wants to "instigate riots" for political gains in the 2019 Lok Sabha elections, his elder brother Mulayam Singh Yadav, in his address, started talking about his own party instead.

"The SP carries everyone along with it, treats all human beings as equal irrespective of their caste and religion, so make the SP stronger," he said.

Earlier, during his address, Mr Shivpal said: "We will oust the BJP from power at the Centre and in Uttar Pradesh... We want peace and brotherhood, the communal people want to instigate riots."

"The then BJP government (in UP) had submitted an affidavit assuring security (of the Babri mosque). But, despite the affidavit, the Babri mosque was demolished. They want to spread the same fire in the country," he added.

"In the Dharam Sabha, which was held in Ayodhya on November 25, there were efforts to vitiate the atmosphere, and the workers of PSPL came out on the streets so that no riots take place in Ayodhya," the PSPL chief said.

"The need is to remove the current government, which is dishonest, useless and false. I and 'netaji' (Mulayam Singh Yadav) are with the Muslims," he said.

Mr Shivpal said there should not be any temple on the disputed land and added that the Supreme Court order on the matter should not be defied.

"If the temple is to be built, then a piece of land can be searched on the banks of the Saryu river. There is no dearth of land for the government," he said.

Mr Shivpal alleged that there is corruption across varied sectors and departments in Uttar Pradesh.

"(Narendra) Modi ji might go on telling about his 56-inch chest, but there isn't any strength in it to combat corruption. Tall promises of the chowkidar of eradicating corruption have been just like a disaster in UP," he alleged.