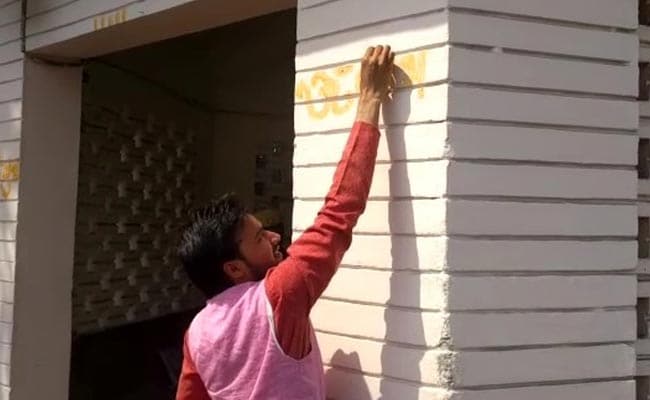 Priest performing a ritual at the gates of Yogi Adityanath's new home.

Lucknow: Propped on a stool and flanked by security officials stiffly standing guard, a priest performed rituals this morning at the gates of 5, Kalidas Marg in Lucknow, the official home of the Uttar Pradesh Chief Minister, which now has a new occupant, Yogi Adityanath.

The priest, Pravir Shastri, is part of a team of seven from Gorakhpur, where Yogi Adityanath heads a powerful mutt or ashram. The team will perform rituals before the 44-year-old priest-politician moves into the bungalow that was home to previous Chief Minister Akhilesh Yadav for five years.

"It is nothing to do with religion. Do not see it from the narrow viewpoint of religion. This is a question of one's beliefs and faith," said Mr Shastri, who was also seen writing the word "Om" on walls at the entrance using a holy paste.

"This is a part of Vaastu rituals before anyone enters a new home," he said, rubbishing questions on whether the rituals send out a strong religious message as the saffron-robed Adityanath takes charge as Chief Minister of India's most important and populous state.

Yogi Adityanath will also walk into the house at an auspicious hour, said the priest.

Promoted
Listen to the latest songs, only on JioSaavn.com
The five-time member of Parliament from Gorakhpur was sworn in on Sunday with two deputies - Keshav Prasad Maurya and Dinesh Sharma - and 44 other ministers carefully chosen by the BJP, which swept the Uttar Pradesh election. His appointment is seen as a significant step for the BJP, crucial to the party's preparation for the 2019 national election when it will seek another term at the Centre.

Adityanath Yogi as well as his Uttarakhand counterpart Trivendra Singh Rawat are considered close to the RSS or Rashtriya Swayamsevak Sangh and its ideology, and rivals allege that the BJP's message is crystal clear.