The weatherman predicted moderate rainfall in most parts of south Bengal, and heavy showers in one or two places in Purba and Paschim Medinipur, South and North 24 Parganas and Birbhum districts. 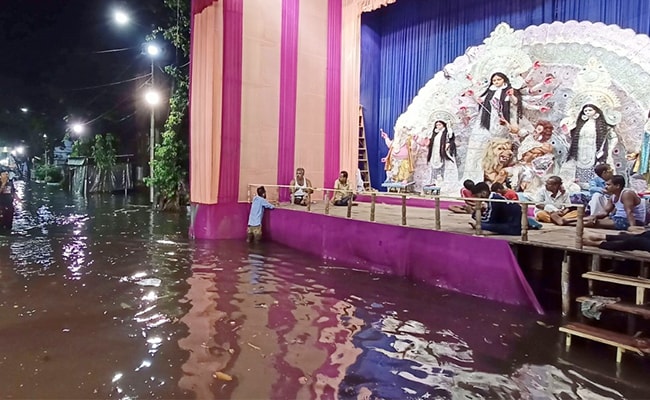 Rain lashed several parts of southern West Bengal, including Kolkata, on Sunday, dampening the festive spirit on Saptami or the first of the four-day Durga Puja festivities, which are taking place on a full-scale after two years' gap due to the COVID-19 pandemic.

The rain goddess may act as spoilsport during the remaining three days of the festivities, with the India Meteorological Department (IMD) forecasting moderate to heavy showers across south Bengal over the next 72 hours.

The weatherman predicted moderate rainfall in most parts of south Bengal, and heavy showers in one or two places in Purba and Paschim Medinipur, South and North 24 Parganas and Birbhum districts during the period.

"A cyclonic circulation lies over northeastern Bay of Bengal and extends up to 5.8 km above the sea level. This system is likely to be active for the next three days and trigger rainfall intermittently across south Bengal," an IMD spokesperson said.

However, to some relief for residents of Kolkata and its surrounding areas, the IMD said the weather in the city will generally be cloudy with few spells of light to moderate rain.

Kolkata recorded 31 mm rain on Saturday, with some pockets experiencing a downpour and other parts remaining dry. Areas in north and central Kolkata experienced the showers, while there was scanty rainfall in the south.

Sunday's rain figure was being collated.

"People are visiting us in droves despite the rain. We will pray to the Mother Goddess so that the situation does not worsen," Soumen Dutta, spokesperson of Kashi Bose Lane puja committee said.