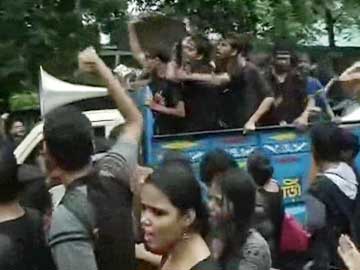 Students from Presidency University, Calcutta University and other educational institutions joined the march in a show of solidarity demanding resignation of JU VC Abhijit Chakrabarti after the alleged brutal police action on students inside JU campus in the early hours of Wednesday.

They were stopped by police near Mayo Road crossing in the heart of the city following which the students launched a sit-in at the spot demanding the VC's resignation.

Representatives of students later had a two-hour-long meeting with governor, who intervened to end the stalemate.

A Raj Bhavan official said the governor, who is also the chancellor of JU, advised the agitating students to maintain discipline and restore its 'peaceful atmosphere' from Monday.

"A delegation of seven students of Jadavpur University met the chancellor. They put forth their grievances. The chancellor patiently listened to them and advised them to maintain discipline and restore peaceful atmosphere in the university from Monday (September 22)," he said.

"The governor sir gave us a patient hearing. He expressed his moral support to our cause and said that he will look into each and every aspect including the barbaric police action on the students," a JU students' representative told reporters after the meeting at Raj Bhavan in Kolkata.

The students, he said, have handed over a CD to Tripathi which has video clipping of the police action on the students.

"The governor sir sought time till Monday morning. So till then our academic strike will go on but we are withdrawing the sit-in (at Mayo Road) for the time being. We will again meet on Monday at 12 noon and decide our next course of action after seeing the steps taken by chancellor," he said.

The students procession raised slogans against the police, the JU VC and Trinamool Congress government. It caused a traffic snarl in the city's central business district.

"The government changes but the attitude of those who are in power never changes. In 2005 during the Left rule police too had beaten us inside the campus," a protestor said.

JU students have boycotted classes on their demand for the VC's resignation. Those in the mass communication department have boycotted their examination on September 18.
Comments
KolkataJadavpur University