Bad weather has also hit the Kolkata airport with several in-bound flights diverted and delay in out-bound flights. Several passengers were stuck at the airport for hours. 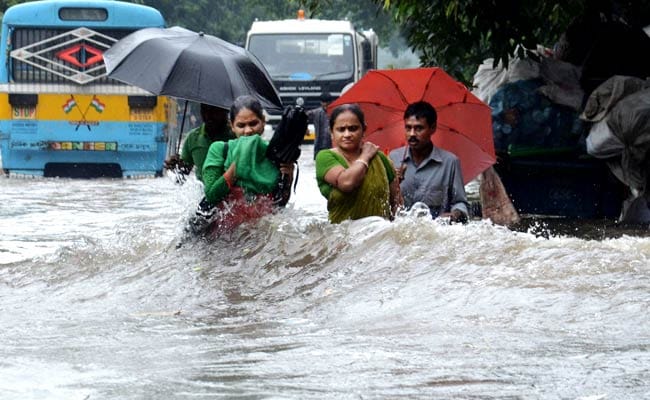 Kolkata Rain: Some schools in the city declared holiday owing to the inclement weather (File)

Kolkata: Heavy rain along with gusty wind lashed Kolkata and nearby areas since late last night with the Met department forecasting more downpour till tomorrow.

Incessant rain and squally wind affected normal life in the metropolis on the first working day of the week. Waterlogging and uprooted trees were reported in areas like New Alipur, Narkeldanga, Gariahat and Jadavpur. Slow traffic movements were reported from some parts of the city including the EM Bypass, NSC Bose Road and Commissariat Road.

Bad weather has also hit the Kolkata airport with several in-bound flights diverted and delay in out-bound flights. Several passengers were stuck at the airport for hours.

Many schools reopened today after the Durga Puja vacation and students were inconvenienced due to the heavy rain. Some schools declared a holiday owing to the inclement weather.

"A depression has formed over Gangetic West Bengal and adjoining north Bay of Bengal and lay centred about 50 km
southeast of Kolkata at 5.30 am today," the Met department said.

The system is very likely to move initially west-northwestwards and intensify into a deep depression during the next 24 hours, it said.

Under its influence, rainfall will occur at most places over Gangetic West Bengal, north Odisha and east Jharkhand, with heavy to very heavy precipitation at isolated places in these areas, the Met department said in its forecast till Wednesday morning.

Strong wind speed reaching 30 to 40 km per hour gusting to 50 km per hour would prevail over the interior parts of Gangetic West Bengal. Sea condition would be rough in north Odisha and West Bengal till tomorrow.

Fishermen have been advised not to venture into sea during the period.