Anti-Gandhi Pandal A Problem, But So Are Others, Says BJP In Kolkata

"We strongly condemn any move to insult Gandhiji. But while the administration commendably took note of the incident and promptly responded, it did not take any action after the Hooghly incident showing Maa Durga with a TMC flag," the BJP leader said. 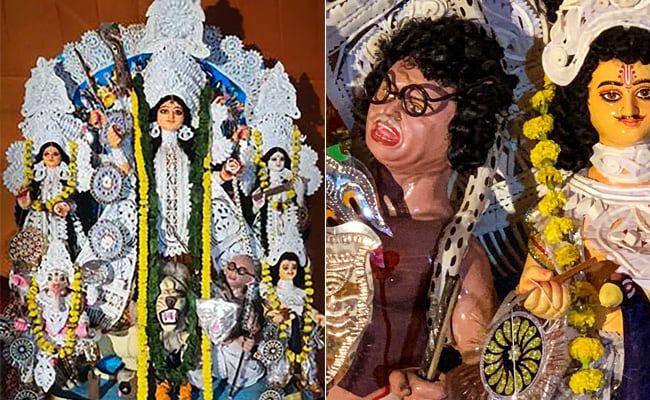 The BJP today said while it unequivocally condemned the installation of a Mahatma Gandhi look-alike Mahisasura at a Durga Puja pandal in Kolkata, the party claimed that several other pujas have hurt public sentiments in the past in Trinamool-ruled West Bengal.

The party's state spokesperson Samik Bhattacharya told news agency PTI that past instances of putting a Trinamool flag in the hands of the Goddess at Gurap in Hooghly district, playing 'azaan' (Islamic prayer) at a Durga Puja pandal in Kolkata and adorning the path leading to another marquee with shoes had neither been condemned by the Trinamool and nor had the administration taken any action.

'Azaan' or the Muslim call to prayer was played in a pandal at Beleghata in Kolkata in 2019, while shoes adorned the path to the idol at another marquee in Kestopur area the same year.

The Beleghata puja organisers said 'Azaan' and also the 'Om' chant were played as the pandal was themed on communal harmony, while those of Kestopur said the shoes signified the farmers' movement in the country and the footwear were installed at a distance from the marquee, in which the idol was placed.

"We strongly condemn any move to insult Gandhiji. But while the administration commendably took note of the incident and promptly responded, it did not take any action after the Hooghly incident showing Maa Durga with a TMC flag or the 2019 incident of use of footwear to decorate a puja pandal," the BJP leader said.

"Actually some organisers are emboldened to commit such acts (of depicting Mahisasura as a Gandhi look-alike) as they know the spirit of devotion associated with puja is being violated in TMC-ruled West Bengal, where the Chief Minister inaugurates pujas even before Mahalaya and chants wrong shlokas on the dais," he said.

Mr Bhattacharya said numerous incidents in the past, including the "forcible" postponement of Bijoya Dashami as it clashed with another festival, point to the fact that the Trinamool has reduced the religious spirit of Durga Puja to a "farce".

No doubt, it is a festival of harmony but the spiritual aspect had been blatantly violated by the ruling party in West Bengal, he said.

He claimed that the BJP would have raised a hue and cry if the puja conducted by the Akhil Bharatiya Hindu Mahasabha (ABHM) would have been stopped by the police and the party would have taken a 360-degree turn from its stated position of criticising the "sacrilegious act".

"Durga Puja is a social festival...a festival of humanity and amity in West Bengal where the religious aspects are scrupulously maintained. The BJP does not believe in togetherness and wants to create a rift. That is why it has been rejected by people of the state," Mr Ghosh said.

"Portraying the father of the nation as a demon was a sacrilegious act and the police took prompt action. But had the puja been stopped, the BJP would have gone to town and falsely blamed the administration of being anti-puja," he added.

In a Durga Puja pandal near Ruby Crossing, a Mahisasura idol bore resemblances with Mahatma Gandhi as it had a bald head and was dressed in a white dhoti and wore round glasses, creating controversy on the father of the nation's birth anniversary on October 2.

However, the idol's appearance was later changed by putting hair on the head and a moustache following instructions from the police after a complaint was lodged.

The organisers, ABHM, claimed the similarities were "just a coincidence".

According to mythology, Goddess Durga slew Mahusasur in an epic battle to end his evil reign.

"The Durga idol that was worshipped here initially had a Mahisasur whose face looked similar to that of Mahatma Gandhi. The similarities were coincidental. After photos of it went viral, a police team visited the pandal and asked us to change the face," ABHM state working president Chandrachur Goswami had said.

Sourav Ganguly's Wife Admitted To Hospital With Chikungunya In Kolkata