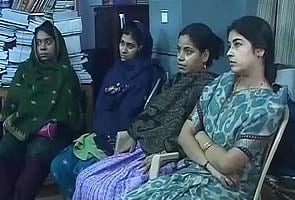 Kolkata: After holding their headmistress hostage for 21 hours, 29 students of a school in south Kolkata finally lifted their siege on the basis of a promise by higher authorities that their answer scripts would be re-examined. Later in the day, the Higher Secondary Council instructed the school to hold a re-test for the students who had failed. Teachers of the school said off the record that the decision was humiliating and would set a very bad precedent.

Trouble at the Rishi Aurobindo Balika Vidyalaya in south Kolkata began around 3pm yesterday when 29 students who had failed their class 12 pre-board exams gheraoed the headmistress Srimati Ghosh and several other teachers demanding that they be given pass marks and allowed to sit for the board exams.

105 students had taken the pre-board exams. 76 of them passed the exam but 29 students failed in more than two subjects.

Students claimed they had been unfairly marked. Parents of some of the failed students also joined the melee.

"They have to pass us," shouted one student. "They have to meet our demand on this. We have been failed wrongfully. They have lost our answer sheets." Another student said, "They are saying only those who have failed all subjects have been detained. But that is not possible."

As news of the siege filtered out, police arrived on the spot last evening itself but failed to resolve the situation.

The headmistress - Srimati Ghosh - said the school would not pass the agitating students unless ordered to do so by officials of the state's higher secondary council.

Ms Ghosh called several authorities, including the education minister's office, but there was no intervention.

The siege continued through the night.

Around 11 this morning, two officials of the West Bengal Higher Secondary Council arrived at the school and held a meeting with the principal and teachers.

An hour later, Achintya Pal, secretary of the Higher Secondary Council announced that the Council would re-examine all answer scripts and then see how many of the failed students could be given pass marks.

The students agreed to the proposal and dispersed.

Mr Pal insisted that there was no effort to undermine the authority of the school principal.

Later in the day, the Higher Secondary Council advised the principal to hold a re-test for all the students who had failed. But the principal and teachers said the council's decision was humiliating and would set a bad precedent.

"Everything is ok. But the teachers were humiliated," Ms Ghosh said. "They heard the students' grievances but teachers were not given due respect. We will soon have other students making similar demands."

In fact, even as the agitating class 12 students dispersed, there were reports of class 10 students also demanding re-evaluation of their answer scripts.

Promoted
Listen to the latest songs, only on JioSaavn.com
Several educationists have said the incident at the Rishi Aurobindo Balika Vidyalay was anarchy.

Kolkata's Air Quality Drops To 'Very Poor' In Most Parts, 'Severe' In Some