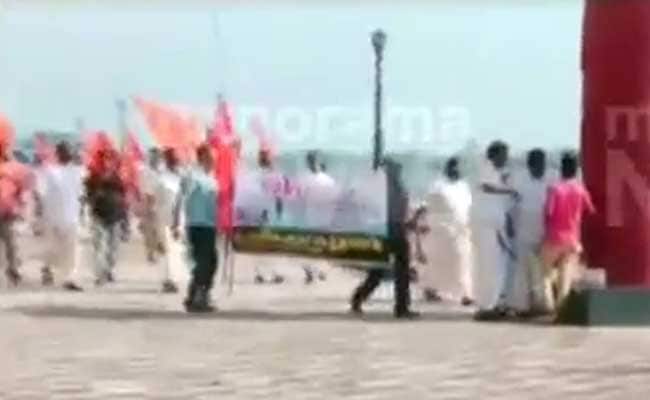 Kochi: In a Facebook post strongly condemning the attack on couples in Kerala's Kochi by Shiv Sena activists on Wednesday, Chief Minister Pinarayi Vijayan said he would not allow any moral policing or "goondaism" in his state and "police sticks should be used against such people".

Sena's young leader Aditya Thackeray tweeted this evening that the attackers had been "suspended indefinitely".

Six Sena activists have been arrested and a policeman has been suspended amid outrage over the visuals.

The attackers will also be charged and punished, said Mr Vijayan in his post. "These people think they can continue in the old ways of patriarchy, of subjugating women. These people think women should be restricted to homes. These men attacking women and men sharing a coffee, traveling together, working in an organisation together, are handicapped in their thinking. There is no question of allowing moral policing in today's times and world..." he wrote.

The men were seen marching with flags and banners before some of them broke away to run after couples. One man was heard shouting at and abusing women in the presence of the police, who appeared to keep a distance.

Last month, a 22-year-old man was found hanging outside his home days after he and his woman friend were filmed, abused and attacked by a group of men on the beach in Kollam on Valentine's Day. The video was put up on social media by five young men, all of whom were arrested.

On February 22, a couple took on the state police by live-streaming a policewoman who approached them at a public park in Thiruvananthapuram, accused them of vulgarity and fined them.
Comments
Kerala moral policingPinarayi VijayanKochi marine driveKochi moral policingShiv Sena