Onam is being celebrated with zeal and fervour in the state this year after festivities were restricted for the last two years owing to the COVID-19 pandemic. 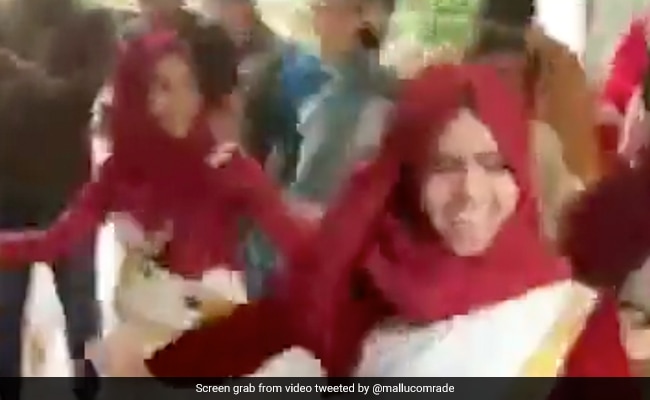 A short video clip of Hijab wearing students celebrating Onam in a high school in Malappuram in northern Kerala has been widely shared on social media with veteran Congress leader Shashi Tharoor 'liking' a tweet about it.

The video, which is being widely circulated and viewed on various social media platforms, shows several Hijab wearing students of Wandoor Government Girls Higher Secondary School here wearing sarees and dancing to music, along with their other school mates, as part of the Onam celebrations held in their institutions.

It is being appreciated and highlighted by thousands on social media with some even comparing it to the Hijab row in the neighbouring state of Karnataka earlier this year when girls wearing the headgear were denied entry into some institutions.

One such person on Twitter -- who goes by the name of Comrade Mahabali -- posted, "Onam celebration at Wandoor higher secondary school, Malappuram. Dedicated to the low lives who says Onam is a Hindu festival and to our neighbour state that denied education to Hijab wearing girls." Senior Congress leader Shashi Tharoor is one among the thousands who have liked this tweet.

His party colleague and MLA from Wandoor, AP Anil Kumar shared the viral video on his Facebook page.

Another tweet by one Ashok Swain, who is Professor of Peace and Conflict Research at Uppsala University in Sweden, said, "Onam being celebrated by Hijab-wearing Muslim girls in a school in Kerala - Onam is harvesting festival of people of Kerala, not of Hindus only as Hindu right-wing claims!" This too has received thousands of likes.

Onam is being celebrated with zeal and fervour in the state this year after festivities were restricted for the last two years owing to the COVID-19 pandemic.